I finally got around to viewing Yellowbook CEO Joe Walsh’s recent appearance on FoxBusinessNetwork. The line of questioning presumed the obsolescence of print, which Walsh certainly anticipated. He made a few assertions that one might expect — that people still use phone books, despite what you might think, and that Yellowbook has been responsive to environmental concerns, with smaller books and opt out and so on.

He also said a couple of things that were kind of interesting. He made a distinction not based on big versus small markets, but rather coastal versus heartland. Asked if phone books would still be around in five years, he said “Yes,” but added that in some coastal markets, the migration from print to digital usage might be completed within five years. In smaller markets in South Dakota, Mississippi and so on, print is strong today and will likely still be strong in five years. And when asked what his biggest seller is today, his answer without hesitation was “Web sites.” Click here or on the image below to watch the interview in its entirety. 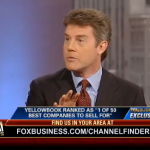