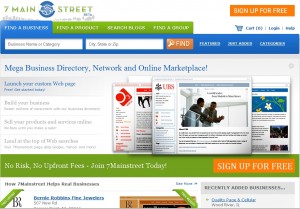 Philadelphia-based 7Mainstreet cofounder Andy Leff got the idea for his company about four years ago while driving to the grocery store. “I was listening to something on the radio about the success MySpace was having with helping rock bands promote themselves, and I thought no company is doing anything like that for small businesses.”

Leff and his father, Ron, have since worked together to build 7Mainstreet into a platform for small businesses to establish a presence online that doesn’t just present listings content but enables them to sell inventory, interact with customers via social tools like blogs, post video, visual images and so on.

It’s kind of like the old storefront concept married with the modern Internet Yellow Pages. Rather than a business listing or info page, the standard offering for a small-business advertising is a commerce-enabled micro site. Andy Leff says one point to emphasize is that advertisers using a microsite can have total control over their environment, where on some sites, their presence can be cluttered by banner ads for competing or even conflicting messages.

The Leffs are currently trying to convince directory publishers, newspapers, catalogs and business-to-business publishers, among others, to white label their solution as a platform for selling online advertising and services to their small-business customers. In particular they’ve focused on the independent publisher space and to date have announced one client, Illinois-based Eagle Publications. 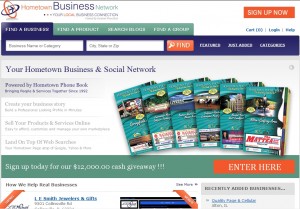 This is a crowded space, but the Leffs believe they have a key point of difference in their emphasis on enabling commerce, rather than just establishing presence.

We asked how 7Mainstreet drives traffic, which is the main challenge facing any independent publisher trying to build an online presence. The answer is a combination of things — all the sites are listed in a common database so all customers benefit from wider exposure than just the publishers that sold them the microsite. Plus 7Mainstreet is active in link building and other efforts to drive traffic.

Andy Leff also says it’s important to level with small businesses about the role they play in the performance of the site.

“You can buy a gym membership, but to get the muscles you need to show up and do bench presses,” Andy says. “If [SMBs] do not use [the microsites], they will not get full benefit. They need to put as much information in there as possible in order to improve their search ranking.”