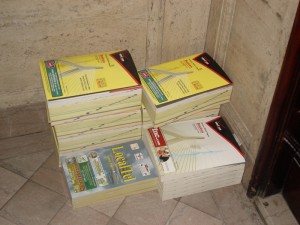 For the past few years, the U.S. Yellow Pages industry has been playing a nationwide version of the arcade game “whack a mole” — beating down one opt-in or opt-out legislative initiative after another with a metaphoric sledgehammer.

For the most part, these efforts have succeeded. Last week was different. A committee of the California state senate passed a very strict White Pages opt-out measure by a 6-4 vote. The Yellow Pages industry (on this one, rival trade groups YPA and ADP are on the same page) doesn’t just fear the consequences in California. What really makes publishers perspire is the idea of copycat legislation — something particularly dangerous when a bill passes in a bellwether state like California.

State and local legislative bodies have targeted directory publishers because directories have become a visible symbol of waste to many, particularly in markets where there are multiple books distributed and in dense urban markets where stacks of phone books are often left uncollected in apartments foyers, photos of which have become the de facto symbols of the opt-out movement. The directory industry has countered that the environmental impact is exaggerated and that it can address any waste problems through self-regulation.

This is how ADP (the group representing smaller, independent directory publishers) President Larry Angove describes the California measure in a letter e-mailed this afternoon to the association membership:

The next step is the Senate Appropriations Committee, which is expected to pass the measure, meaning it’s likely to face a vote by the full senate. The bill was originally written as an opt-in measure, but later amended into an opt-out. However, the industry still sees the measure as unduly harsh.

In his letter, Angove makes clear the importance to publishers of defeating the bill.

“The defeat of SB 920 is critical,” he writes. “If SB 920 passes, copycat legislation across the country is a realistic threat. Prepare for battle!”