Mobile social player Loopt has made lots of moves to evolve amid quickly changing market standards and user expectations. This has involved moving from a purely social tool to a more broadly defined local utility — recently including Foursquare-like check-ins, and a partnership with coupon provider Mobile Spinach.

Today the company continued this march with a new partnership with  Tasting Table. The deal will give Loopt users insider info on bars, restaurants, wine shops and culinary retail establishments throughout New York, L.A., San Francisco, Chicago and Washington, D.C.

This includes directions, menus, editorial insights and offers. The content will be folded into the “pulse” feature of its mobile apps and be integrated with the existing check-in functionality. That will include the ability to add free-form editorial input that others can use when searching for the same spots.

This will join the existing content on its mobile app from Zagat, Citysearch, Bing and Mobile Spinach. It also has a loyalty program in the works that will likely integrate with all of the above.

There’s lots of talk about some of the newer entrants in the mobile location space such as Foursquare, Gowalla, et al. I’m an avid Foursquare user but the service is overexposed. In the incestuous media linking that is the tech blogosphere, earlier entrants like Loopt and even Yelp get less ink, despite many more users.

Loopt’s 3 million users outnumber Foursquare by about four to five times and its new check-ins could provide competition to the upstart. Continued content and functionality enhancements could also make it competitive with broader local tools with considerable mobile traction, such as Yelp — though that will be a tougher challenge.

Expect to see Loopt continue to redefine itself and fight for share in this quickly developing and still uncertain crossroads of mobile/local/ social. Meanwhile, watch Facebook closely for its inevitable integration of geolocation capabilities. Combined with its 100 million active mobile users, it will be a powerful force in this space. 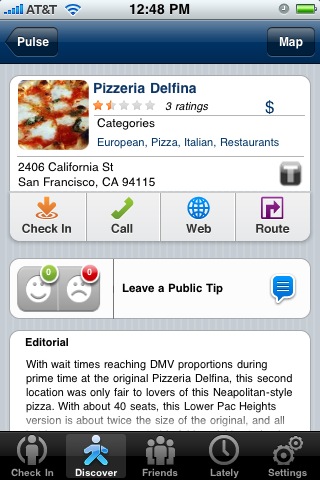