Local search based marketing specialist eLocal Listing today became the latest in a growing wave of companies to offer video advertising to SMBs. As pointed out in last week’s post “Universal Search Paves the Way for Local Video,” an opportunity exists — outside the IYP realm — to distribute videos on search engines using SEO strategies.

One issue, however, is that the majority of SMBs aren’t willing or able to shoot a video ad, convert it to a digital format, upload it to YouTube, and build a corresponding landing page with optimized meta-tags and site copy.

ELocal Listing primarily targets these SMBs by offering not only video, but also a way to get online in the first place. It specifically caters to businesses that don’t have Web sites — a sizable segment, as we’ve mentioned, and one that is most likely to need help getting their video shot, edited, uploaded and optimized.

“Since a majority of our small-business advertisers don’t have a Web site, clicks can be meaningless to them so we drive phone calls,” says President and CEO Tim Judd, adding that the company is using call tracking numbers to do so.

The price tag is also designed to be SMB friendly: The landing page is $99 and then the monthly fee to get placed in Google and Yahoo! is $159. This is not unlike the local SEM and SEO services of the likes of ReachLocal, Marchex and LocalLaunch. But the new video offering sets it apart and is essentially a free add-on at the existing price point. The idea is that these videos, in addition to the landing pages, surface in local search results.

“We’ve had top results in Google within three days of creating and submitting the video,” says Director of Product Development Steve Espinosa. “These are terms such as ‘painting in Columbus Ohio’ or ‘photographer in Sacramento.’ These aren’t small cities.” 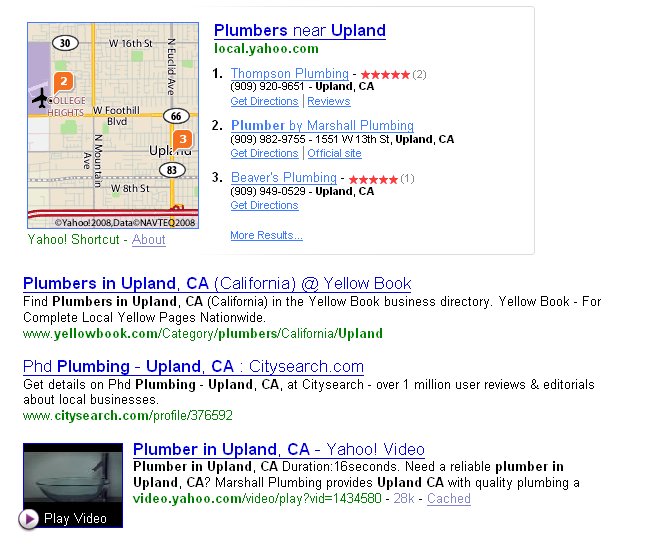 The video creation process itself is similar to Spot Runner in that the advertiser picks an ad from a selection of stock footage that is specific to its business category. The video is then customized with the company’s information, custom photographs and an end card (see example from the above Yahoo! SERP here). This is also like EZShow except that it doesn’t have the same level of customization.

“You pick a video you like, and we’ll assemble it with the information you want shown at the end, add the music, and then it becomes part of your online profile,” says Judd.

The company will roll out with about 1,000 videos in 20 categories, and its goal is to eventually have tens of thousands of videos in a couple hundred categories (it also allows advertisers to use existing creative, if they have it). Over time, it also hopes to see some viral marketing advantages — explored last week — as the videos show up in top spots in Google and Yahoo! and carry its own branding (watermark).

This viral distribution and SEO strategy is a double-edged sword, according to Espinosa. Though the universal search movement enables opportunities to get video into top spots in major search engines, the rapid evolution of these search algorithms requires constant modification, and some serious SEO chops.

“Our content syndication strategy and our profile pages have changed three times in the past two quarters to adapt to how Google and Yahoo! read and establish authoritative documents for their algorithms,” says Espinosa. “It’s constantly evolving and our strategy has to constantly evolve along with it.”