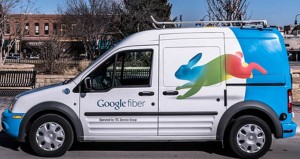 The Google Fiber Team announced that it will be launching a trial of local television ads as part of its Google Fiber service in Kansas City, MO and Kansas City, KS. The locally targeted ads will appear “during existing ad breaks, along with national ads, on live TV and DVR related programs.”

The Google Fiber TV ads will be delivered in real time and will be matched to households based on factors including geography, type of program shown and viewing history. Viewers will be allowed to opt out of seeing ads.

Google says that local advertisers on the Google Fiber service will only pay for ads that run and they can limit the number of times an ad is shown to a particular TV set.