This morning at SMB Digital Marketing, BIA/Kelsey Chief Economist Mark Fratrik and VP of Business Development Steve Passwaiter walked through a view of the U.S. local media marketplace, and offered a sample of BIA/Kelsey’s Media Ad View Plus, a data product that allows local sellers to see how advertisers allocate their spend in local markets.

The movement toward digital is ongoing, and also one reason for slugging advertising growth. Digital is less expensive, more price effective, which means advertisers are less likely to increase their overall ad spend. The movement toward non-advertising marketing solutions may also be contributing to the sluggishness, Fratrik said.

By 2017, the local ad market will reach $148.8 billion, about $41 billion of which will be online/interactive. Newspapers are still an important player in the local media marketplace. However, online/interactive and particularly mobile will be the growth drivers of local media. Mobile for example, will grow from less than 2 percent in 2012 to more than 6 percent in 2017.

Media Ad View Plus takes BIA/Kelsey’s forecast down to the local and vertical level. MAV looks at local markets five years forward, and answers questions like, “How much do auto dealers in Austin, TX, spend on video display advertising?” [See the chart below for the answer.]

Passwaiter noted that MAV is available at a reduced rate of $1295 per market, good until Sept. 27. 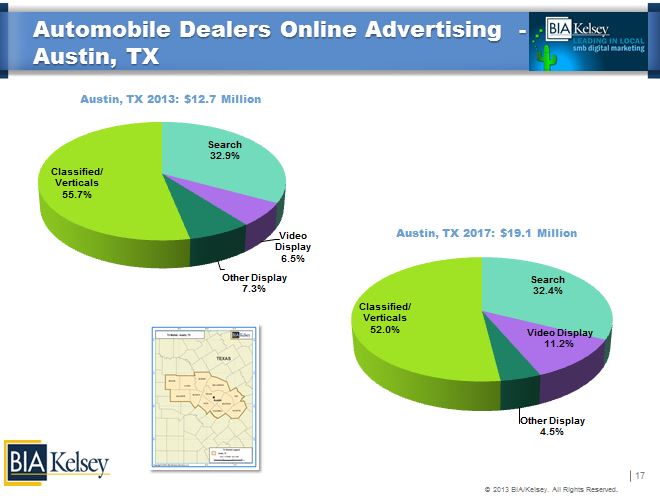