Amazon doesn’t usually speak at industry gatherings. But that was before it needed to reach out to the advertising community to sell display ads on its sites, ads on Kindle, national and local offers on Kindle, and extend its promotional reach on third party sites. Hence a luncheon keynote today from Seth Dallaire, VP of ad sales, at the San Diego Ad Club’s “San Diego’s Interactive Day” (a big SoCal event with 825 agency types).

Dallaire gave a great briefer on Amazon’s culture, suggesting that its mentality is very compatible with progressive digital marketers. Amazon “tests and measures everything,” he noted. It also goes to great pains to “find the right conversation” with its ratings, reviews and feedback. The conversations aren’t “real time” like Twitter but are very relevant, he said.

Amazon CEO Jeff Bezos has always infused Amazon with the mantras that there is “always something new to create,” and “every day is like your first day. If you don’t have the focus, you will be left behind,” said Dallaire. “This is now Advertising, Day 1.” The effort to sell ads and offers on Kindle, for instance, has been met with derision in some quarters. But Dallaire says it fits in perfectly with all Amazon’s other efforts. A recent campaign to promote “The Lorax” film on Amazon, for instance, got the full treatment: a movie trailer for the Kindle Fire, display ads, a cross promotion with the Leap Across America charity and adjacent promotions for Dr. Seuss traditional book titles.

The result exceeded goals for sweeps, video streams and social activation benchmarks, said Dallaire. More concretely, it resulted in a 25 percent increase in unaided awareness and a 50 percent increase in the likelihood of parents wanting to take their children to the film. “It helped us create a better experience for the consumer and was a win-win all around.”

Products in Kindle ads are generally 5x more likely to be purchased, Dallaire added. But Amazon has had to make several iterations of the ad units to achieve these kinds of results. “The first thing we heard back was that it needs to be clickable to take advantage of its immediacy,” he said. “The second was that Amazon had better focus on its capability to target. Some people don’t want to see an ad for a football video game,” he said. “We are becoming more efficient” in this kind of targeting.

A greater emphasis on mobile is also inevitable, said Dallaire, noting it is consistent with Amazon’s mission to promote convenience and discovery. “It is getting harder and harder to separate the consumer from the device,” he said, noting all the channels that people have to access Amazon and other websites.

Dallaire takes strong issue, however, with the criticism of Amazon for encouraging “showrooming,” where consumers go to brick-and-mortar stores such as Best Buy to physically check out a product, do a price comparison and then order from Amazon. Amazon gave $5 credits last Christmas to customers who did it. In fact, it goes both ways. Many consumers go to Amazon to check out reviews and then buy from local retailers, he said. 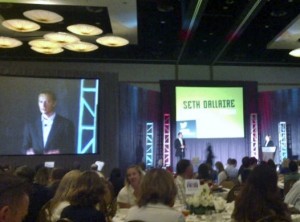