Mobile social app Foursquare is getting lots of attention and growing quickly into new cities throughout the U.S. and Europe. For those unfamiliar, the app lets you check in at local establishments to alert friends where you are.

The value exchange involves gaining “mayorship” of places where you check in more than anyone else. This gaming element keeps people engaged through a sort of competitive spirit among friends (and strangers). There is also competition on a weekly leaderboard of check-ins, and the ability to acquire badges for your status as a local socialite.

The app has been a media darling and an urban necessity among mobile mavens in places like New York and San Francisco (I’m hooked). But the business model question has been asked many times in the analyst corps, and has been a source of doubt over the product, like many popular local search players before it (i.e., Yelp).

But over the past few months there have been implications that a revenue source could come from local businesses interested in driving foot traffic. This plays out as businesses bring the gaming element into their doors — offering freebies to mayors or anyone that checks in.

This of course requires the buy in and participation of the owner — something that sounds good on paper but comes with the scalability challenge often faced in self-provisioned local advertising. But it’s an interesting concept that’s starting to rear it’s head in a few different ways.

Today, I saw it for the first time; I’ve heard people talk about it but haven’t seen it yet firsthand. Below are a few screen shots that show the call to action on the check-in screen and the resulting clickthrough. Unfortunately I didn’t have time to go “find Schlomo” (nor start drinking at 3:31 p.m.).

No definite indication whether or not Foursquare is directly monetizing these ad units yet or just getting the ball rolling. Either way, expect to see much more of this — and other flavors of this concept — emerge in social local apps that are building Foursquare-like features, such as Loopt. 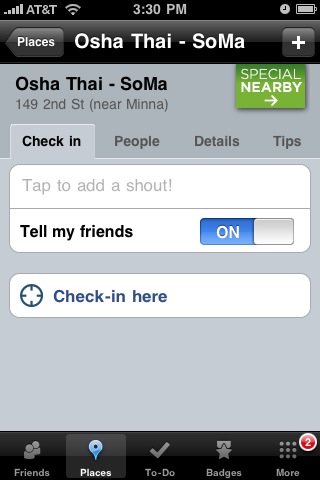 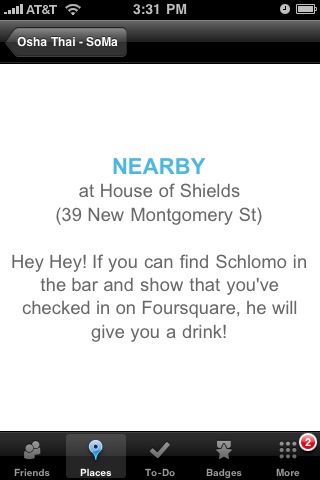