MapQuest today announced the availability of its MapQuest 4 Mobile iPhone app. Its previous moves into the iPhone were limited to an iPhone optimized site, otherwise known as a Web app. MapQuest 4 Mobile is a native app, which can be downloaded in the App Store and has much more functionality.

Here are a list of other features from today’s release:

–There are also icons for leading brands, such as, Walmart, Autozone and Best Western. iPhone users can customize their place carousel with any of the 20 + place widgets available, with more to come in future releases.

–For trips that include more than one stop, MapQuest 4 Mobile on iPhone offers multi-point routing and draggable re-ordering capabilities.

–Driving directions can be read in landscape or “Max Maneuver” mode in which each maneuver fills the entire screen.

–Simply “swiping” the screen to the right or left progresses to the next or previous maneuver.

–This is the first iPhone application to integrate directly with the web-based mapping experience—allowing users to plan their trips on their computer and easily access their maps and directions while on the go.

–Users who have saved maps and directions to their My Places account on the MapQuest.com site can access them directly via their iPhone through MapQuest 4 Mobile.

–Users can also customize the icon that represents their location on the map, either with a stock “My Position” icon that is chosen from a list of options or by using their own photos.

Mapping apps are a tough proposition on the iPhone because of competition with the default Google Maps application that’s planted right on the home screen of new iPhones. MapQuest has good brand equity though and should be able to market the app through its online product.

It’s smart in that sense to have tied lots of the features to online for more of a “continuity of service.” It also beats out Google Maps in some areas such as multi-point routing and the “carousel” feature. More on the app over time as we get the chance to play with it. In the meantime a video promo is here. 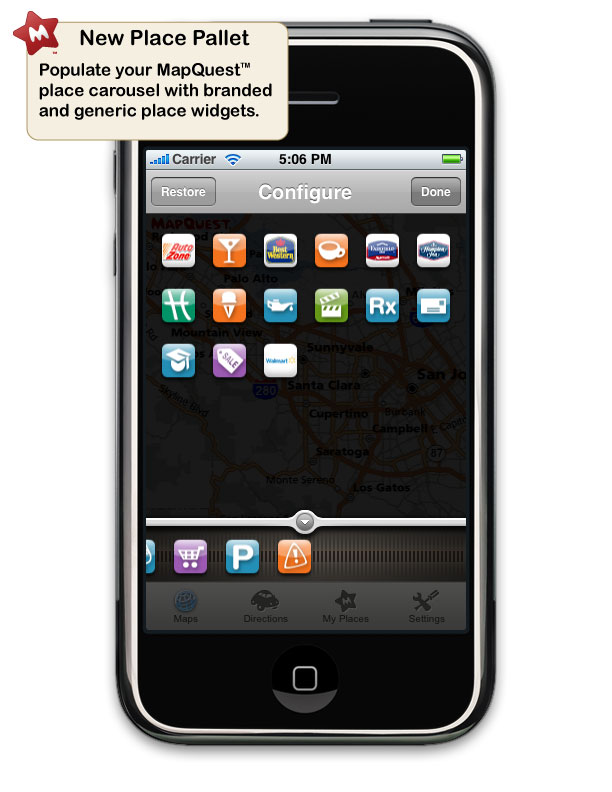