Nielsen released data last month showing the top mobile phones in use in the U.S. in Q3. Motorola’s RAZR continued to top the list, but it’s interesting to note that the iPhone outpaced it in sales, according to previously released data from NPD Group. 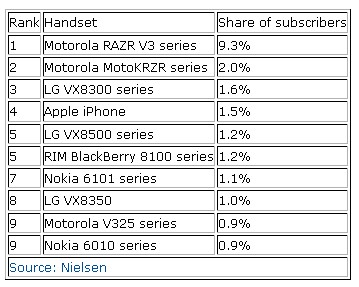 The iPhone is the fastest selling phone in fact, with 7 million units sold in Q3, suggesting that it will continue to climb this list and become more of a mass market device in ’09. This premise was also supported by data presented at ILM:08 by comScore’s Brian Jurutka.

This supports claims of a ramp-up in mobile search volume this year, which bodes well for mobile local search. Advertising growth will be slower due to its experimental nature, combined with the economy (as we keep saying). But it’s nonetheless on the horizon, supported by these leading indicators.