To put this into perspective, there are more videos viewed online than there are searches performed on core search engines (Google, Yahoo, MSN, etc.).This was a key theme we discussed at SES Chicago. 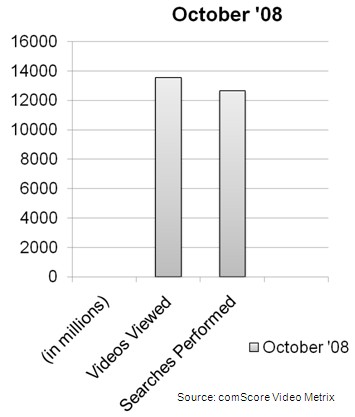 The more interesting point, I think, is that YouTube is the second-largest search engine on the planet, second only to Google. In other words, the number of monthly searches performed on YouTube has exceeded the number done on Yahoo (they’re mostly neck and neck).

This is surprising if you consider the wider swath of possible search queries on a core search engine like Yahoo. One would expect a larger number to come from the broad range of user intent on a search engine, compared with a site whose end game is more limited (i.e., watch a video).

This same question of intent is one of the thorns in YouTube’s side. The site has well-known monetization challenges rooted in advertisers’ wariness toward its user-generated content (it’s pushing hard to change this by bringing in more “head” content).

But a less often discussed issue is this question of user intent: For YouTube, it’s decidedly less commercial. Users conducting these staggering volumes of searches are largely showing up to be entertained — and have been conditioned by YouTube to expect the very minimum commercial intervention.

Unlike search engines, this cuts out a great deal of quality traffic with any degree of commercial intent or threshold for enduring ads. This goes for both directional or direct response advertising as well as branding (probably more so with the former).

In other words, despite all this traffic, very few users are showing up to YouTube to look for businesses (especially local ones). Its advertising is therefore going to have to be much more branding oriented than directional, which I’m sure the company knows. Even still, it’s going to be a challenge to not only get Madison Avenue to warm up to its content, but also to get its users to warm up to Madison Avenue.

The local angle? All this is supportive of one of the advantages held by IYPs and local search sites: The commercial and local intent of everyone showing up to conduct searches is well known. Combine this with video — as many IYPs are doing in full force — and it could be powerful.

Related: CitySquares’ Ben Saren has a column over at Local Search News about local search and user intent.