Today we put out a press release with some of the mobile figures from our recent local media forecast. And later I’ll follow up with a post that digs much deeper into some of the numbers. This is all stuff we’ll be building up to and discussing at our MLM San Francisco show on June 27.

But on a side note, today came a moment of truth in digital media forecasting. It’s when the IAB’s prior year “actuals” come out and analysts rush to see if their numbers were on target (or even in the right ballpark). I’m happy to say our top-line 2011 mobile ad revenues hit that mark.

Slightly off from our calculation of $1.7 billion, the IAB reports 2011 U.S. mobile ad revenues of $1.6 billion (up 149 percent year over year). Our methodology differs from the IAB’s, which makes it all the more affirming: like high school math partners who work in isolation then come up with the same answer.

There is, of course, much more to it, and we’ll be spending a great deal of time in the coming weeks digging into the key usage metrics and forecast inputs. We have much to dissect, and there will be a lot of marketplace implications. In the meantime, here’s our top-line mobile revenue projection. 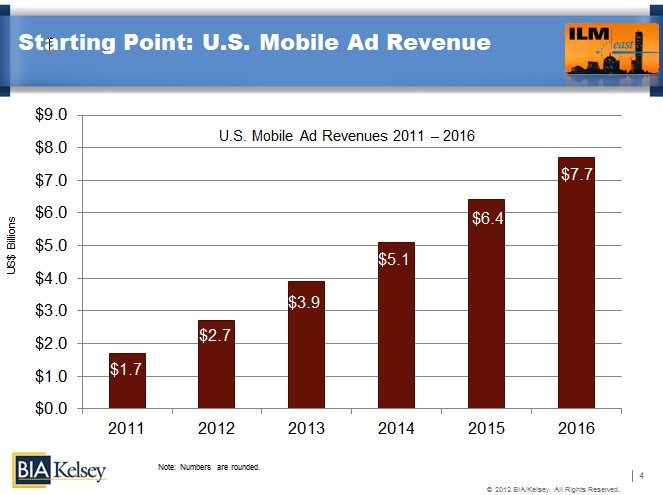