xAD is becoming quite the contender in the emerging crop of mobile local ad networks. Loosely in the same category as WHERE and CityGrid, the company works with mobile publishers and advertisers to place ads that have local relevance and targeting parameters.

The secret sauce comes down to serving location and contextually targeted ads with high precision, thus boosting ad performance. The company now boasts eCPMs in the $30 neighborhood — much greater than more broadly defined AdMobs and Millennials of the world.

The company has also separately told me that its network sees 80 percent fill rates and 10 percent CTRs. Half those clicks result in secondary actions such as phone calls. Those are pretty impressive metrics that indicate the secret sauce is working.

In addition to quality the company is now boasting quantity, having reached 2 billion ads served. The pace has also clearly picking up as the total has doubled in the past four months (it took 18 months to hit the first million).

With this news, the company announced that private equity veteran Steve McCarthy will join the team as CFO, and Babak Dehnad will join as VP of human resources. 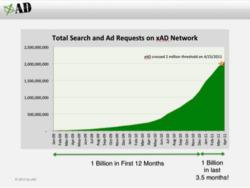