Today I had the chance to talk to Karl Weigl, managing partner of market research firm BRS Group. The firm generates consumer behavior metrics across a wide range of industries like tech & financial.

This includes all-important consumer usage patterns — an area covered in different ways by Pew, BIA/Kelsey and others. The idea is that Silicon Valley often loses sight of how Main Street USA actually uses technology. It’s the “Silicon Valley effect” we’ve written about.

BRS’ latest research is on mobile payments — top of mind because of the report I just wrote. For the purposes of this post, I’ll highlight a few of the points on the user adoption end. This is vital to the chicken-and-egg game that is mobile payments (like so many other emerging areas).

Most notably, the data show that trust is imperative for adoption. This is akin to the comfort blanket provided by credit card companies that have your back in matters of fraud, theft or loss. In mobile payments this is huge, as normal adoption barriers are made worse by security issues. 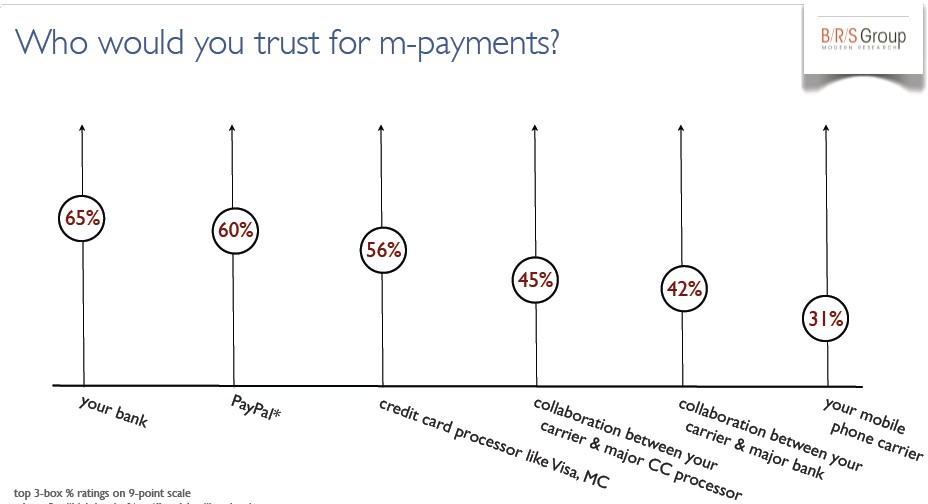 For that reason, BRS data show that financial institutions generally score higher for trust, compared with some of the other companies in the mobile payment ecosystem. Carriers by comparison, rate lower on this trust scale that will be so imperative for adoption.

Companies like ISIS, for example, will position carriers as the main “face”, while the back-end transaction processing will happen via Barclays and Discover. Weigl argues that it might see more adoption if these payment processors — again trustworthy in this context — were the main face.

“Isis may have more of a challenge than they think in getting users to adopt,” he says.

Another dark horse is Apple, as we’ve argued. Here, Weigl agrees that Apple has a certain degree of the consumer trust that his data show is important. This is not only true of Apple’s famous halo effect, but also its existing transactional relationship with $150 million iTunes customers.

Along these lines, he also mentions Starbucks’ new mobile payment system (our writeup here). He asserts that its trust factor could position it well. This goes for both the cultural saturation of the brand, as well as the popular gift cards that have acclimated people to paying in similar fashion.

“Starbucks has $1.3 billion outstanding on its gift cards at any given time,” he says. “All this does is transfers the physical card to mobile form.”

Starbucks could also extend this beyond its own (comically numerous) doors. If it can mainstream mobile payments in the way we’ve argued it can, it can solidify trust even further by being the first to acclimate users. This is a phenomenon seen across different areas of tech adoption.

The resulting ownership of the user, Weigl asserts, could position Starbucks to form affiliate relationships with retailers that accept its mobile credits. POS hardware is one barrier, but if Starbucks can pull this off, it could preempt NFC, which everyone seems to be talking about.

There’s a lot more to his data and this only scratches the surface. We’ll continue the conversation in the coming days and years.