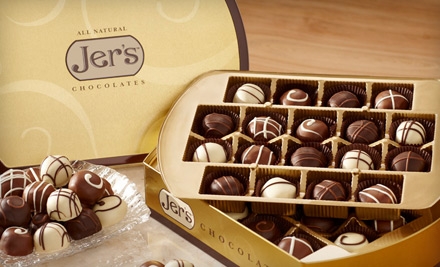 Jer’s Gourmet Chocolates of Solana Beach has the world’s best pretzel chocolate balls, and Jer, a former IBM EVP, can be found all over North County San Diego hawking his handmade creations and talking chocolate. I’ve seen him at Costco and The Mother’s Day chocolate festivals at the San Diego Botanical Gardens.

He’s also got placement for his chocolates at major grocery chains, such as Whole Foods. Recently, he’s opened his first retail store, right next to MojoPages’ office.

Jer prices his chocolate as the premier gourmet treat that it is, at $2 or more a piece. But the Costco in-store promotions, et al tend to come in at a much lower price (and Costco presumably gets a cut as well).

Groupon seems to make a lot more sense for acquiring customers since it doesn’t really devalue the product. And so it was that Groupon ran a “can’t resist” Valentine’s promotion of $10 for $25 of chocolate. I bought one, and my wife bought another with her account. I also sent the offer to three friends so they could get their wives something great.

Yesterday (Sunday) we headed down to the store, got some nice presents at very good prices, and bought a little “overage” to ease our guilt, since we’re already customers for life. We also got a chance to catch up with Jer, who was in his office (the guy works hard). He told me that Groupon was after him to run a promotion for six months, and told him to expect a couple hundred Groupons, given all the options out there for Valentine’s. Instead, 672 Groupons were sold.

That was no problem (unlike Posies, the little luncheonette that got overwhelmed with Groupons). Jer has the capacity to handle the extra sales, and was pleased with the result. While his mail order business and corporate gift giving business has been taking off, the local retail side still needs attention, he says.

Assuming Groupon is taking 50 percent, I estimate Jer will take in $3,360 for chocolate that will have a retail value of $16,800. I don’t know what his costs are, but given the quality of his chocolate and packaging, I imagine he will be a little in the red for this promotion.

But he will theoretically have a better chance to acquire many new customers — from the sales, referrals to friends and the Groupon promotion itself, which was a great showcase for Jer’s, and lets people know about the retail location. I bet the promotion will ultimately prove to be a winner.

But he didn’t come out ahead with me (unless my three friends went out and bought the Groupon as well and will become customers). I was already a customer, I only spent $2 beyond the Groupon value, and we got two Groupons, compounding the loss. He also didn’t come out ahead with the family that was in the store with me, who also got their hands on two Groupons. Let’s hope there are not too many of us.

Note: The deal-a-day companies have to be more careful about their boasts about savings. Groupon has taken some heat this weekend for showing a $50 value on an FTD Valentine’s promotion that FTD’s site had on sale for $40.

Previously, I had found Groupon placing a value on a San Diego Museum of Contemporary Arts membership that was considerably higher than what you could buy on the museum’s website. In that case, however, it was just a matter of promotion. The museum ultimately boosted the Groupon value by providing four guest passes, but that wasn’t highlighted in the promotion.