Today Yelp is launching a new set of tools for businesses to better evaluate leads they’re getting from its mobile products. Specifically, businesses that have claimed their listing and unlocked Yelp’s suite of free business tools can now also see:

This all branches from the fact that Yelp drove half a million calls to SMBs in May from its iPhone app alone. These analytics simply make it more apparent to businesses that they’re getting real leads from Yelp. In that sense, it will serve as a proof point that will drive real ad dollars in the future.

Yelp could eventually monetize the new mobile analytics directly, but will initially position them as a free value add, according to mobile product manager Eric Singley. On that measure, they should serve as an additional enticement for local merchants to claim their Yelp listings and start using its business tools — many of which are free.

“We’re seeing more tangible engagement in mobile apps and customers walking through the door,” says Singley. “There is so much much happening but it’s hard for [merchants] to make connection. This is our way to show it more explicitly.”

This will initially take form in an e-mail newsletter sent to merchants but Singley tells me it will likely integrate deeper into Yelp’s profile management dashboard.

“This is step one, to get it in front of people as soon as possible,” he says. “E-mail is visible and they get it in their inbox, front and center. But we do eventually want to integrate it more deeply with the online product.” 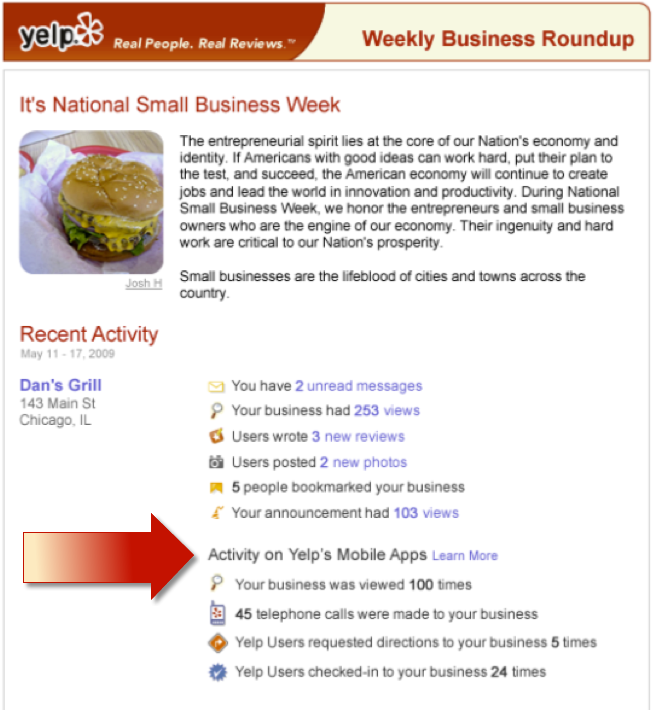 Overall, this is a logical move for Yelp and follows a string of recent announcements that make it a more attractive consumer destination and advertiser tool. These include integrations of OpenTable reservations and video by TurnHere.

This is increasingly important as competition for mindshare and advertiser interest heats up in the local space. In addition to the longstanding competitors of this space like Citysearch and Google, we now have a new batch of challengers in the Foursquares and Loopts of the world.

This goes for both online and mobile media. The latter has been a big area of development for Yelp, where it’s seeing 2 million monthly uniques and 27 percent of its overall searches. See the video below from the last time I interviewed Singley; he underscores the levels of investment the company is making in mobile.

So far, this has mostly included its iPhone app but it’s making investments in Android as well; Singley tells me the latest version of its Android app will launch this week and be brought up to speed with the flagship iPhone app (v.4), including check-ins, streamlined interface and the “monacle” augmented reality feature. Stay tuned.