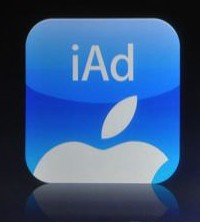 As reported this morning here and everywhere else in the world, Apple’s anticipated iAd program was given a name and a face.

First, this is big. It’s a bold but logical platform for building, distributing and displaying mobile ads. Its deep integration with the device and operating system is perhaps its biggest advantage. This will enable the mobile ads and campaigns we’ve been waiting for.

The platform is built on Apple’s view of an app-centric world. This involves the growing “apps vs. mobile Web” debate, where in the other corner sits Google, pushing for a mobile experience whose front door is the browser. Today, Steve Jobs couldn’t resist a jab.

“When you look at ads on a phone, it’s not like a desktop,” he said from the stage. “On a desktop, search is where it’s at. But on mobile devices, that hasn’t happened. Search is not happening on phones; people are using apps. And this is where the opportunity is to deliver advertising.”

For developers, there are advantages in creating mobile Web sites which we’ve examined. They include cost, compatibility and avoiding the hassle of building apps for many different platforms. But the downside is missing out on apps’ greater functionality and integrated experience.

Along these lines, iAd now adds another advantage to the apps column. Specifically, ads can now utilize some of the native capabilities of the phone. From a clicked banner ad, for example, rich functionality can be launched right within the app, instead of taking you to a separate place.

This includes games, video, music and maps. Previously, the app had to be closed (or now pushed into the background) so that another function could be opened. Most often this involved separately launching the browser to open a landing page with a brand message or additional calls to action.

The latter point was positioned as a large driver for this move. Putting Apple in a virtuous light, Jobs explained how this is a way for the many developers of free apps to make money. As we’ve mentioned, it also has a certain one-stop-shop appeal, eliminating the hassle for developers to separately join a mobile ad network.

But the subtext is that it’s also a way for Apple to discover a new (and exploding) revenue stream. The math goes something like this: Average iPhone and iPod touch users spend 30 minutes per day with apps. Ads displayed every three minutes would equal 10 ads per device per day, and 1 billion ads overall per day.

Apple will host and sell the ads and take a 40 percent revenue share, the rest going to the app developer or publisher. Little was revealed about how the company will set itself up to sell (and/or approve) advertising, but this should come to light soon.

It’s not just about creating more ad inventory, but Apple is angling for better ads. If today’s demos — and the promise of better OS integration — are any indication, this will happen. Movie banner ads will launch animated games and promotions that “act” like apps and let users see nearby theaters. A demoed “Toy Story 3” ad indicated as much.

These are the mobile ads we’ve been talking about. They’ve been partially held back by technical bottlenecks like GPS ubiquity. But it’s also a result of Madison Avenue’s latency in wrapping its collective brain around mobile. If there is a company that can get them to “think different” about ads that are more logical for a new kind of device (not a computer), it’s probably Apple.

“We have a lot of free or reasonably priced apps. We like that, but our developers have to find ways to make money,” said Jobs today. “So [they’re] putting ads into apps, and for lack of a better way to say it, we think most of this kind of advertising sucks.”

So much more to say, so little time. How will this affect other ad networks operating within iPhone apps (including Google/AdMob)? How will Apple sell and monitor ad units created for iAds (App Store-like approval process)? How will advertisers “upload” location data for the inventory and mapping scenarios above?

Much more to come soon.