I recently had the chance to talk to Jeff Smulyan, president and CEO of Emmis Communications. Smulyan was one of our keynoters at May’s Winning Media Strategies conference. We picked up the conversation where the conference left off: the sizable mobile opportunity that awaits the radio industry.

This is very similar to the opportunity facing the broadcast television industry, which we recently outlined. Like television, the idea is that we plant a chip in every handset, making it capable of receiving a broadcast signal.

There are lots of advantages including saturation of broadcast media, and cost when compared with streaming content. The benefits to broadcast media meanwhile include the ability to reach incremental consumers, as well as existing consumers at incremental outlets.

The road to get there is a bit different from television, having a few openings in the public and private sector. Specifically, Emmis is among a consortium of broadcasters that have put hundreds of millions behind an effort to push legislation for mandated FM chips that are tied to an emergency broadcast system.

The argument is that this will enable a more effective and economically attractive system than the current SMS-based system on the table, pushed under the 2008 WARN Act. For emergency broadcast purposes, the advantages of FM broadcast over SMS include:

–Cell networks are tied to the power grid and thus knocked out in potential emergency situations; broadcasters are backed up by generators.

–Even if the power grid stays on, network capacity is jammed. We learned this from 9/11 and more recently when it took the Obama campaign 16 hours to send 13 million text messages announcing Joe Biden’s VP nomination.

— SMS character limit can render a message ineffective or not comprehensive.

— Cost: $1 to $2 per chip installation (comparison in chart below)

Beyond emergencies, there are important business implications. You’re essentially tying a one-way communication to the two-way capabilities of the mobile device. This opens the door to transactional models and more mobile calls to action in radio content.

Songs, for example, can be tagged, identified and linked to iTunes or other content transaction systems. ITunes already does this through streaming music apps such as Pandora and Shazam. These are music discovery engines and sizable sales drivers — but radio is the original discovery engine, argued Smulyan.

It’s frankly surprising that Apple hasn’t already done this to drive iTunes sales. Smulyan believes this is due to Apple’s unease about bringing in someone else’s business model, i.e., radio. But those barriers are coming down, he said.

If Apple were to embed an FM chip in the iPhone, the rest of the industry would follow. This is where private-sector lobbying could join the efforts in Washington. Smulyan believes we’re closer than you might think: The iPhone’s Qualcomm chip already has an FM receiver — it just hasn’t been turned on yet.

Lots of other challenges exist, and Smulyan fully acknowledges them. There are many moving parts, including carriers, OEMs, government and spectrum. But the reward is well worth the effort in the positioning it could bring to the radio industry.

“Twenty years ago, people went into Radio Shack and bought a Walkman, and that’s how they consumed their media,” said Smulyan. “Today they buy a cellphone. What we’ve learned is that people want one device and this is it. We need to be there.” 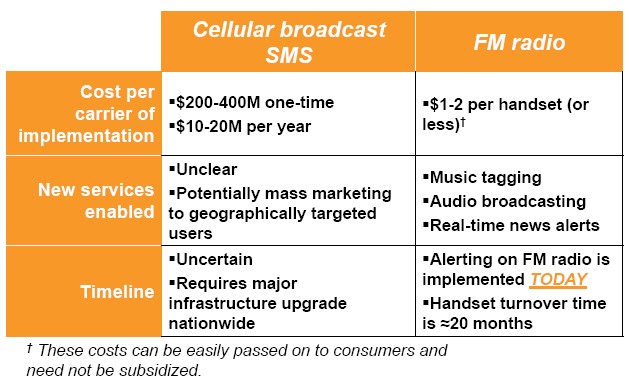