Microsoft made the expected announcement at The Wall Street Journal’s “D” conference today that it will launch a new search brand next week called Bing. Labeled as a “Decision Engine” (jargon alert), it has a dizzying array of new features aimed at redefining the way we search and improving the current state of the art (read: Google).

In general, Microsoft seems to be on a local push with products over the past few years like Live Local (Live Maps) and Virtual Earth 3D. More recently, it has been ramping up its local team and having conversations with newspapers. These include current Yahoo! Newspaper consortium publishers to which it could offer looser terms, according to my colleague Peter Krasilovsky.

It also has a neat local feature that offers blended or “universal” search results within a local search. A search for a city returns an array of weather, events, sports and local video. Now all it has to do is train users to search for cities (not sure how many users are doing this today).

Other features include video search that displays thumbnails (this is similar to Blinkx.tv for those familiar). It also boasts a five-day forecast instead of a single day, which Google has in its blended search results and iGoogle (to this I say “big deal”).

In addition, it will include an answers feature known as Best Match, a site scraping and summary tool called Deep Links, and a mouse-over feature that provides caption info about sites. The rest of the features can be seen in the press release, but many of them are branding. Virtual Earth will now be Bing Maps for Enterprise and Cashback will now be Bing Cashback.

Do We Need Another Search Engine?

Over the past 10 years, Microsoft has had a way of launching products that are arguably necessary (Vista, MS Office versions, etc.) and flirt with the boundaries of the “if it ain’t broke” question.

This is especially true in the world of search, where it has found itself in the unfamiliar position of not being dominant. With many product releases, one gets the sense that it is either trying to differentiate itself from the search mold as we know it (i.e., Google), or that it’s grasping at straws. It’s probably the former.

For example: Cashback, Search & Give, and the Windows Live home page redesign.

Search has been a particularly important stake for Microsoft during all this, given the market’s migration from desktop software to online services and content that resides “in the cloud.” The latter is one of the core tenets of what has become the amorphous and overused term “Web 2.0.”

Some of Microsoft’s search products have been critically acclaimed but commercially unsuccessful, such as Live Local (bird’s eye) and Virtual Earth 3D (ahead of its time in my opinion). Where Bing falls is simply a matter of how it’s accepted.

To Microsoft’s credit, it’s an uphill battle to create something that is good enough to break users’ addiction to Google. Among all the activities online, search is one of the most habitual, which bodes well for Google and its 63 percent market share.

Though it wasn’t explicated, of course Bing is a direct shot at Google. Google Cofounder Sergey Brin couldn’t let the moment pass at yesterday’s I/O conference to comment (albeit diplomatically) about Bing.

Steve Ballmer, meanwhile, made a few of his own comments today. In an apparent shot at Google for its recently publicized (and overblown) criticisms for aggregating and profiting from news content on Google News, he claims Bing could go a different direction. This could go beyond the role of simply a search engine to actually form content deals.

“We’re not trying to get in the way of copyright holders,” he said. “If value should be redivided somehow between content providers, advertisers and search engines, let’s have that conversation. … We’re not trying to profit off of anyone else’s work.” 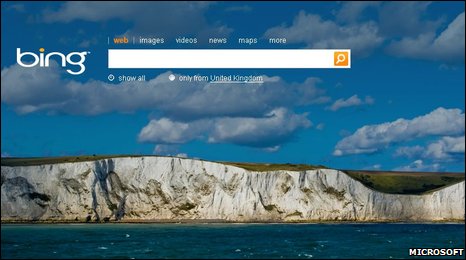