Local/social/event planning site Center’d announced a redesign late yesterday, which will make the site more effective as a local search and discovery engine.

This will be version 3.0 if you count the site’s first iteration as FatDoor. The second version of the site, under the direction of former Yahoo Marketplaces head Jennifer Dulski, fashioned itself more as a local event planning tool. This had lots of great resources for not only searching for local venues like bars, restaurants, parks, etc., but also for planning and organizing events (see past write-up).

Like a lot of new sites entering the fragmented local space, the biggest challenge has been to get attention and user traction over all the noise. The relaunch will take into account many learnings from the past year and presumably lots of feedback indicating who its users are and what they’re looking for. Dulski has good experience in the local space, and I imagine these moves are well thought out.

In short, many of the event planning resources are still in tact, but taking center stage are more local search resources and discovery tools. The latter comes about with the assertion that the local search use case often involves discovering content — not just finding an address, phone number or directions for a known business.

This is certainly true and is the premise behind lots of successful local search tools such as Yelp, Citysearch and Urbanspoon (Yellow Pages can be argued as the original local discovery engine). Center’d takes a novel approach with lots of interesting data mashups for indicating popular spots, or those that fit into any number of criteria a user can specify, such as price.

This includes a rather large data set of scraped content from around the Web, which algorithmically identifies lots of business attributes. It’s also presented in a colorful and attractive way including letting users choose the “style” of their search (romantic, kid friendly, outdoor, etc.). This should set it apart from design and functionality standpoints, against the many local search sites out there.

Like its previous iteration, the site seems to be targeting rural moms. This should prove to be a smart move given the existing user base it has attracted through event planning for families and social groups. Women also make a majority of local purchase decisions in the average household. Not to say that the site is completely gender specific though. 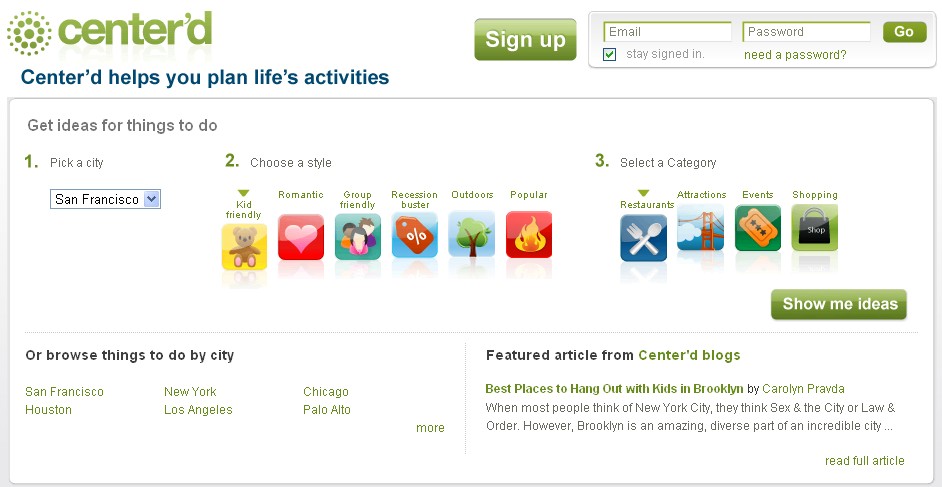