Yelp announced today that it will launch Yelp U.K.

Now people in the UK can use Yelp to read and write reviews about great businesses in their neighborhood. Locals are able to share their opinions on everything from curry houses to spas to mechanics. Additionally, small business owners can set up a free business owner’s account to attract new customers and communicate with current ones.

Apparently more than 100,000 people from the United Kingdom visited Yelp.com over the past month to research U.S. travel destinations, and Londoners have been asking for this for three years. The site will compete with Hamburg-based Qype, among a few others. Qype has gained lots of traction over the past year and has come to be known — fairly or unfairly — by many U.S. industry watchers as the “Yelp of Europe.”

I’ll be in London next month for SES and will be able to give Yelp U.K. a test drive. I’ll be sure to take pictures of “People Love us on Yelp” stickers in restaurant windows all over London. I’ll also have the chance to meet with Qype to talk about the market dynamics in Europe for local and social search. Stay tuned for that.

Meanwhile, Yelp is now up to 4.5 million total reviews, and today’s move follows its August launch of Yelp Canada, integration of SMB marketing tools, personnel (sales) expansion to New York, and a $15 million funding round in February. 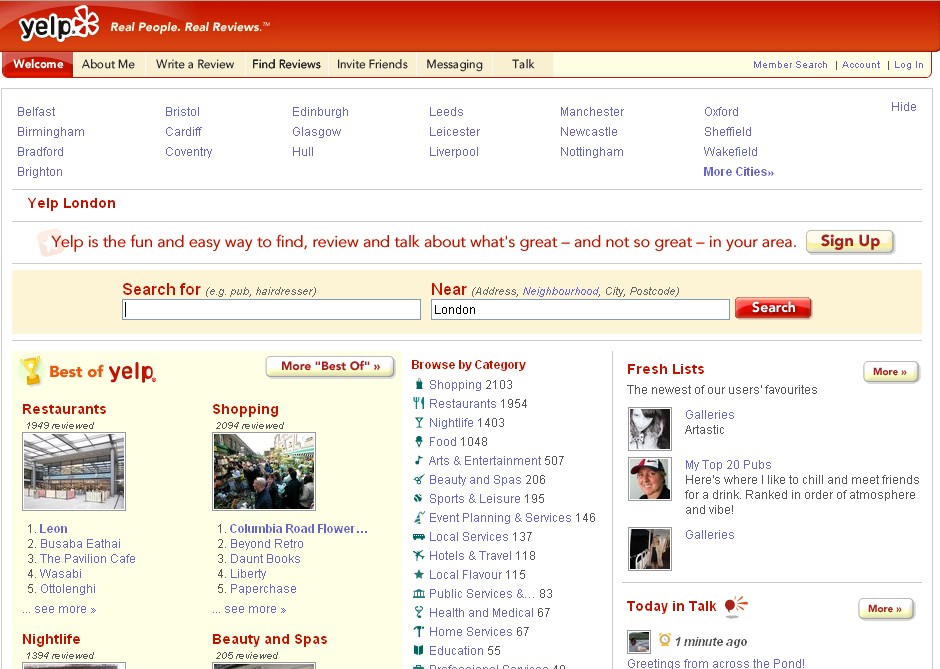