Closing remarks at the Warrillow Summit Toronto yesterday gave advertisers targeting the small and medium-sized business market some hope despite the alarming descent in optimism on the current Canadian economic situation.

A recurring theme over the past two days of the conference was the effectiveness of reaching small-business owners during times of major disruption. Two examples of those disruptive hot spots were times of significant growth and, conversely, times of declined cash flow profitability.

During economic downturns, small-business owners are focused on the following:

The 2008 Warrillow survey revealed that the top trusted sources of pre-purchase information for small-business owners break down as follows: 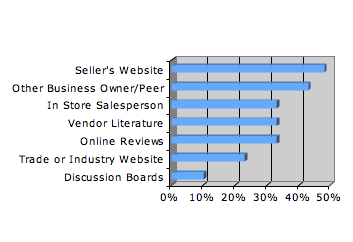 As a result of the strength in word of mouth (48 percent), there was a lot of content around the use of social networking and the importance of finding influencers and brand advocates. Visa’s partnership with Facebook (new small-business card acquisitions were rewarded with $100 credit toward advertising with Facebook) and their development of a small-business community residing on the Facebook platform was highlighted as a great example of how to monetize the SMB social graph.

Another deep area of focus was ratings and reviews. With 35 percent of SMBs placing their trust in this source of information, it makes a lot of sense to capitalize on positive reviews when they’re generated. An emerging trend is the use of reviews as content for search engine marketing campaigns. Buying keywords and developing ad messages around positive reviews is one way to leverage this growing spring of trusted content.

Finally, there was an emphasis on the time-crunched nature of the SMB owners and the importance of communicating effectively — for example, limiting BlackBerry e-mails to 90 characters as this represents one screen, and using terms that resonate with them and their business problems as opposed to using industry jargon.

Two days of laser focus on the needs of the SMB market made it clear there are tremendous opportunities emerging to reach this elusive target. The combined effect of the proliferation of diverse media vehicles available through Web 2.0 and today’s disruptive economic environment brings this segment closer into reach than ever.