Not so many years ago, major Yellow Pages publishers in developed countries reported revenue and earnings growth (or occasionally declines) that were generally very consistent. The advent of serious competition in several markets has had somewhat of an impact on that consistency, and the increasing diversity of marketing and sales plans has also led to earnings diversity. In my view, the most important issue today is how publishers have balanced the need to maintain the strong profit margins that print has always provided while at the same time preparing for the tsunami of electronic information delivery. Adding to the management challenge is economic uncertainty that makes small businesses reluctant to spend money because they are afraid their expenditures won’t generate customers.

With that background, on Monday The Kelsey Group is hosting a half-day conference on Local Online Media in London. Europe is a diverse region consisting of nearly 50 countries, a little more than half of which are in the European Union. At the event, The Kelsey Group will be providing an overview of our forecast for directional media to include major European countries. It appears to us that several European markets are well positioned to grow their aggregate print, Internet Yellow Pages and local search business from 2007 to 2012. Our estimates are that Germany, France, Sweden and Finland will have the highest percentage increases, although none is expected to have print Yellow Pages expansion during this period. Their growth will come from digital products. 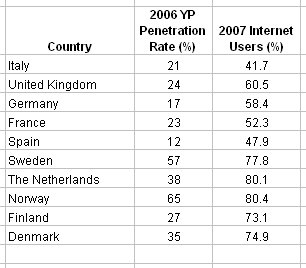 The chart above shows the penetration rate of businesses that advertise in the Yellow Pages (from GYP ’07) and the percentage of the population that uses the Internet. The conclusion appears to be that neither is a significant reason for anticipated directional advertising growth. As we discussed in the first paragraph above, it seems clear that the single most important element of success is the management team. Increasingly leadership in revenue growth and profitability in directional advertising requires the sophisticated management skills of any evolving business.