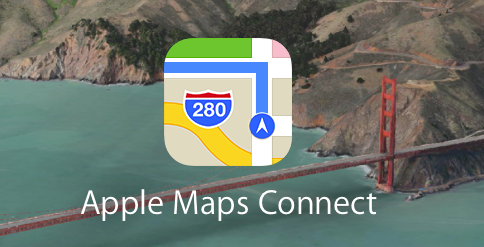 If you’ve used Apple Maps lately, you may have noticed improvements. These are mostly subtle changes, an Apple spokesperson told me today. That’s because it’s all about the data, which of course happens in the background.

As we said at the time of Apple Maps’ 2012 launch, it’s actually a slick mapping tool… it just lacked some of the geo and place data that’s the lifeblood of mapping engines. Mapping is a game won on data, with bells and whistles being important but secondary

Along those lines, Apple launched a feature today that will further improve place data by crowdsourcing its collection and ongoing maintenance. Known as Maps Connect For Small Business, it lets SMBs claim and update their business info and location.

From Apple’s materials on the new launch:

Apple’s goal for the Maps Connect for Small Business tool is to provide small businesses (99 locations or less) with a way to add and edit their basic location information on Apple Maps. We’re always striving to make Maps better and better, and this is yet another step towards accomplishing that. By creating a more seamless and simple solution for small businesses throughout the US, we are helping them ensure their location and contact data is up to date and accurate.

In general terms, this is similar to how local players like Google and Yelp let businesses claim and update information (with similar authentication processes). Apple names speed and simplicity as differentiators — key success factors for anything targeted at SMBs.

Features include being able to move map pins to more accurately reflect business locations or entrances. Other details SMBs can update include name, address, phone, homepage, categories, hours of operation, and links to external Websites.

This list could grow, which could be an entrée to a local advertising play for Apple. This is purely speculation, and I’ve had doubts in the past that improving Apple Maps is a move towards a sort of local iAd as some guessed. But it’s an interesting possibility.

Apple was actually clear that today’s move won’t create maps that are overpopulated with ad units that appear during local searches. It’s mostly about having the right data in the background to let users find what they’re looking for, and for SMBs to get found.

Put another way Apple wants to keep it simple, which can be seen in the brevity of business details it’s collecting. As was a big theme at our SMB Digital Marketing conference last month, SMBs need simplicity. And that’s Apple’s longstanding design philosophy.

“The tools available for SMBs to update their business information are not always clean and simple,” the company told me. “What we wanted to build is something that is in keeping with Apple’s legendary simplicity in product design.”

For now it’s a logical play that could have implications for Apple’s continued moves to be a strong player in local search. That makes a lot of sense considering the ties between mobile and local. After all, a core revenue stream for Apple is selling mobile products.

We’ll watch closely to see where this goes.