The term “Yellow Pages” isn’t tossed around in the advertising world the way it used to be. The local conversation has shifted to online, social and mobile advertising. Yet according to BIA/Kelsey’s Local Commerce Monitor, 29.8 percent of SMBs still purchase print directory advertising.

The LCM data shows that advertisers with bigger budgets tend to be the ones still advertising in printed directories. This makes sense given that print Yellow Pages generally performs better for businesses willing and able to make the investment in a larger ad.

The SMBs that use print Yellow Pages take a very inclusive approach to advertising. When looking at the ad spend distribution of SMBs who advertise in print directories, we can see that ad dollars are split 60/40 between traditional and digital media advertising. Given that digital advertising is typically less expensive (in absolute terms) than traditional media, the spending enables the SMB to have holistic advertising approach. 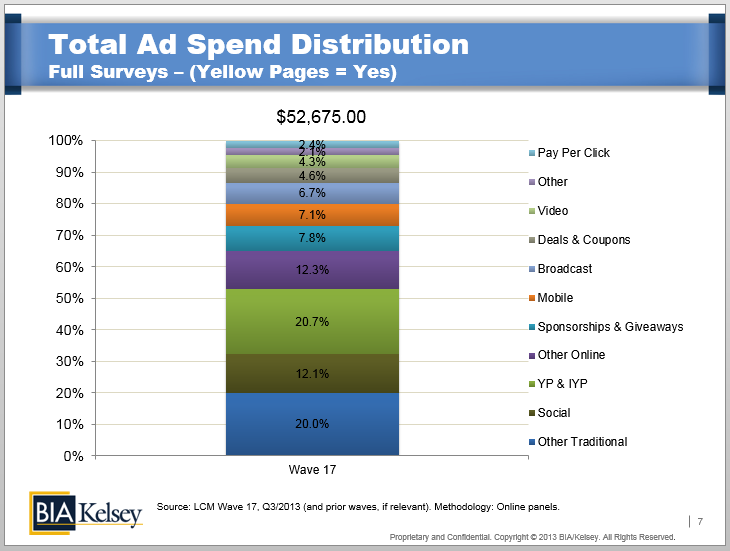 Digital and online spending for these SMBs is also expected to increase by 11.1 percent in the next twelve months. The most likely target for this digital spend is developing a mobile website- 27.2 percent of SMBs that advertise with print directories expect to add one in the next twelve months. Other online properties on these SMBs’ wish lists included a local page on Yahoo, enhanced listing or profile in a mobile app or directory, a LinkedIn page for their business and a Pinterest account.