During his kickoff keynote today at Leading in Local: The National Impact, Foursquare VP of Sales Rob Wilk asserted that his company sits at the intersection of interest and discovery. This has remained unchanged since its 2008 launch at SXSW he says, despite many product evolutions.

His comments come close in the wake of Foursquare’s controversial move last week to unbundle it’s flagship app into two apps. This has been argued by some to fragment its use case. It now has the core local discovery engine, and the separate social activity app for finding nearby friends.

The latter takes form in its new Swarm app while the former will be positioned for a broader mainstream audience. The thought was that some of the features now being peeled out for Swarm were holding the main app back from this broader appeal… and the growth that comes with it.

Wilk also argued that these are two inherently different use cases that should be able to develop on  their own. This echoes the recently well covered comments of Mark Zuckerberg who has similarly unbuldled the “big blue app” and has lots of orbiting apps such as Instagram, Messenger, Paper, etc.

For Foursquare, Wilk characterized these divergent use cases as suggestions and local discovery (main app); and “keeping up and meeting up” (Swarm). He even used “Where you at?” as an unofficial tagline — reminiscent Loopt’s early mantra around similar social/local ambitions.

Interestingly, despite the bifurcation of app front ends, they’ll share the same data backbone. That makes sense considering the rich data that each will uncover about location based sentiment, and the company’s longstanding data-driven DNA. That’s what all those check-ins were for.

The jury is still out on app unbundling, but the single-function paradigm of the app marketplace (“do one thing and do it well”) has proven out in lots of ways. That gains additional support from Facebook’s strategic endorsement. And it has historical significance according to Wilk.

“It will be similar to the de-portalization we saw on the web,” he said. 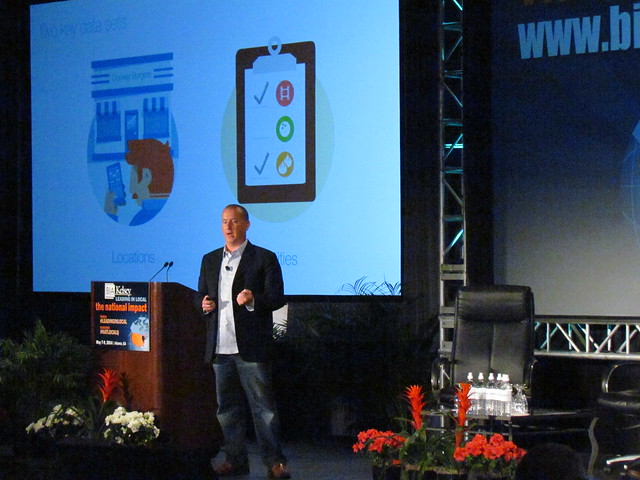 foursquareLeading in Local: The National Impactmobile apps
Please Share This