In the incredibly competitive local advertising marketplaces throughout the U.S., national advertisers are playing a bigger role. National advertisers are increasing their spending in these local markets to target consumers in specific geographic areas. While they still spend on nationwide networks (e.g., NBC, ESPN), they are increasing their spending with local media companies such as local radio and television stations, and local online properties. 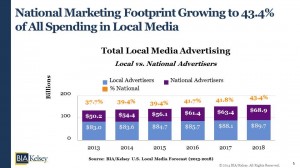 Clearly, advertisers of all sorts are looking for all ways to reach their existing and potential customers. Increased usage of local media outlets by national advertisers is just an example of that.