Traditional media companies are scrambling to build “digital agencies” — essentially in house groups that build all digital packages for SMBs, franchisees and national advertisers. The area is so hot that a two-day conference at a Chicago airport hotel last week focused on nothing but defining what is a digital agency, how to build one and what to sell.

Two leading BIA/Kelsey analysts kicked off the Digital Agency Summit in Chicago with a keynote dense with data and case studies underscoring the whys and hows of the digital agency business. BIA/Kelsey partnered with the Local Media Association to present the summit.

“Digital agencies are hot,” Ducey declared. The real question is, Why?

Simply put, small-business clients’ needs changing, and they are getting more digitally savvy. The digital agency model, at least in theory, allows companies to deliver a more sophisticated and complex digital product set, as well as the consultative approach required to sell these products effectively. Of course, margins are a key consideration, given that many of the products in the agency bundle are resold. 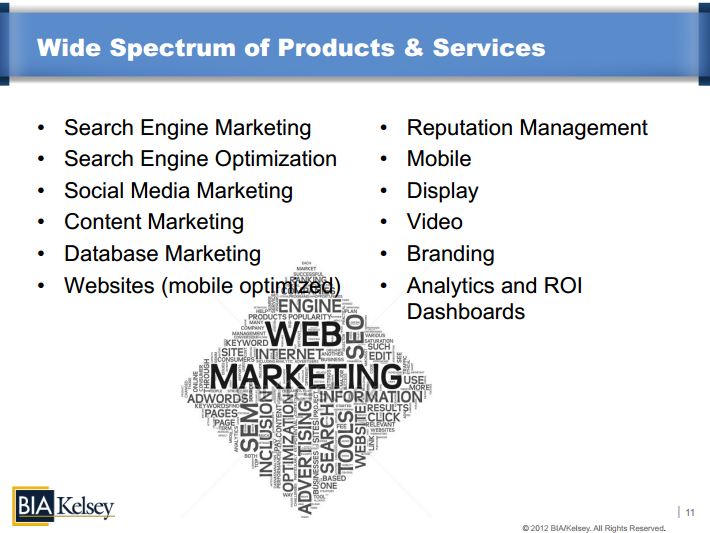 A slide from BIA/Kelsey’s keynote at last week’s Digital Agency Summit in Chicago details the product set that many digital agencies are offering their clients.

The top-line opportunity is clear, however. Ducey noted that local digital media will be a $45 billion business by 2017. Driving that growth is a spending shift, from traditional media to digital, as well as within digital, with more emphasis on mobile and social media, as well as digital services like presence and reputation management.

For now at least, the agency model requires direct sales, more than likely face to face rather than telesales, though both are being used.

“Local is sold, not bought,” Ducey said. “We would all love it if sales were automated, but we are not there yet, and we may never get there entirely.” This point was underscored with data from BIA/Kelsey’s Local Commerce Monitor showing the majority of SMB prefer to deal with a premise (outside) sales rep. 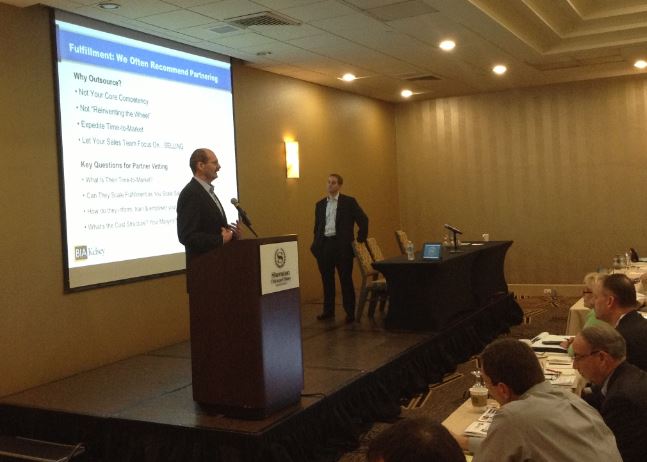 To illustrate how digital agencies are constructed, Williams offered brief case studies of several digital agencies, three of which are housed within newspaper organizations, appropriate for an audience predominately composed of newspaper publishers.

LocalEdge Media is a digital agency operated by Hearst that sells direct and also operates through reseller partners. Local Edge offers 15 core products through 94 bundling variations in 117 local markets. It’s packages start at $395/month. Fulfillment is a big emphasis for Hearts, with 380 people on staff to handle delivery of the product packages Local Edge sells to SMBs.

GannettLocal (now G/O Digital) is Gannett’s agency offering. In contrast to Hearst’s broad-based, longer tail model, Gannett has chosen to focus on five key verticals, and only deal with accounts that spend upwards of $1,000 per month, with most spending north of $2,500. Gannett is clearly focused on margins, chosing profitable verticals like financial services and automotive, and eschewing the rest.

Propel Marketing is GateHouse Media’s foray into agencies. Propel is long-tail, SMB focused, offering digital packages that start as low as $140 per month. It’s secret sauce involves understanding the customer lifecycle, and mapping solutions against the prospect’s place on the lifecycle.

Williams ended with a vertical case study. AutoTrader is in essence a digital agency for the automotive space. The company has been delivering on that promise of a fully integrated agency offer by adding more engagement marketing capabilities to its suite. AutoTrader beefed up its SEM capabilities with its acquisition of Haystak, for example.

Williams cautioned that any traditional media company that dives into the agency business will face an expanded competitive set, including both vertical (Auto Trader) and horizontal (Yodle, ReachLocal) players that have been at the agency game for a while.