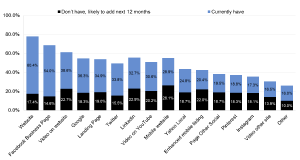 BIA/Kelsey data shows small-businesses are fully embracing Facebook as a media channel. Facebook executives made it clear on the company’s recent earnings call that they see SMBs ultimately driving big revenues for the social media giant.

BIA/Kelsey’s LCM Wave 17 data shows that 54.5% of SMBs are utilizing Facebook page for online marketing. Another 38% say they’re likely to adopt it within the next 12 months.

Facebook COO, Sheryl Sandberg emphasized the company’s commitment to small business on the recent Q3 earnings call. SMBs make up a large piece of the pie at Facebook; 11 million SMBs, 7 million active with a Facebook page and 3 million of them make at least one post per week. SMB Dan Levy announced at the Local Search Association show back in April that 70% of Facebook users are connected to at least one local business page. And in total, there are 645 million monthly views for these pages.

A Comscore/Neustar/15Miles study that showed Facebook has the second largest app usage for local search, behind only Google. Sandberg mentioned again how SMBs are a big opportunity and that they’ve developed products over the past year that specifically target local SMBs. If Facebook can continue to develop ad products that answer the needs of location targeted ads for SMBs, they’ll be in great shape in the coming years to meet our projected demand and growth for the location based mobile advertising market.

Location Based Mobile Advertising on the Rise 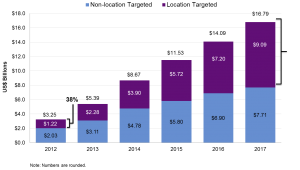 Facebook is heading in the right direction to meet its prediction that mobile ad revenues will surpass desktop ad revenues by the end of the year. Currently, already 48 % of its daily active users only use mobile devices while 49 percent of its total ad revenues come from mobile ads. A surprising fact is how fast FB has grown – 0 to 49% in the last 5 quarters.

Facebook ads garnered in nearly $890 million in revenue during the third quarter through the company’s app install ads, mobile engagement ads, and news feed ads. In comparison to Twitter, whose mobile platform ad revenue ratio is the best of social websites at 70%, means Facebook has the right idea investing in their mobile platforms. Sheryl Sandberg said “Q3 total ad revenue grew 66% year-over-year to $1.8 billion and mobile ad revenue grew to 49% of our total ad revenue. This is a remarkable milestone in the short time since [FB] introduced mobile News Feed ads just last year.”

Facebook CEO Mark Zuckerberg also mentioned the company’s recent acquisitions of Mobile Technologies and Onavo. The first is a speech recognition and machine translation company that will help expand FB’s work beyond just photo recognition to voice. The second is a team that builds world-class data compression technology and mobile analytics. Onavo dabbles in a number of areas, including mobile app analytics and measurement for marketers, as well as in a mobile security division. However, its main core competency is data management and compression and we believe that’s what Facebook cares about the most.

With recent mobile engagement and ad revenue numbers still on target with the company’s projection, we envision Facebook continuing to solidify itself as a strong player in the mobile space. We expect to see continued mobile ad revenue gains and larger push for mobile coming from all ranks within the company to meet this growing industry.