Yesterday at the Borrell, LSA, LMA Social + Mobile event at a Chicago airport hotel, Google executives made the case for Google+ as the centerpiece of an effective SMB digital presence before a roomful of current and potential resellers. The search giant also explained how Adwords enhanced campaigns will make Google’s online advertising more effective in a multi-device world.

Merritt’s message was that Google+ is more than a social network for personal use. “It is a great vehicle for businesses to advertise and connect with customers,” she said.

Google+ now has 190 million active monthly users globally, and has recorded about 390 million social actions, ranging from “+1’s” to reviews. Google+ may be dwarfed by Facebook’s 1.06 billion active users. However, Google+ was was always more about using social content to make search more powerful than beating Facebook at its own game.

Merritt says businesses use Google+ to create and curate their online identity, build relationship with customers, and most important, extend their reach.

Merritt talked about “socially enhanced search” — the intersection between social content and search results, which may be the heart of what Google+ is all about.

According to Merritt, there is a 5 percent to 10 percent uplift in clickthroughs when search results have social annotations, for example an indication of the number of reviews or Google+ followers a business has. These annotations require that the business have a Google+ page plus the right number followers (at least 100). 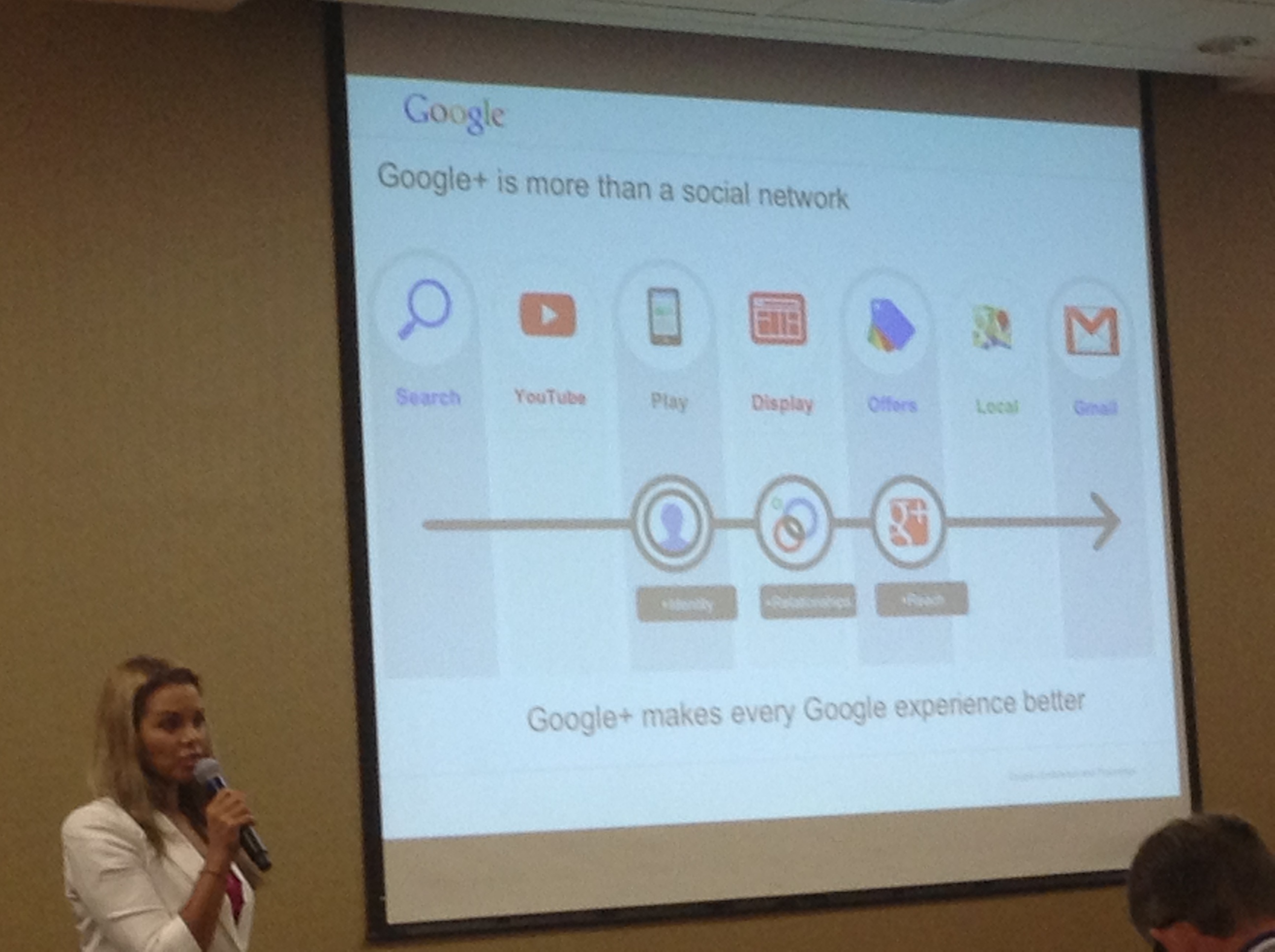 Patel followed Merritt and talked about how Google has adapted to the growing impact of mobile search.

He began by citing legendary analyst Mary Meeker, who recently said, “Mobile is ramping faster than any other technology we have seen in the past.”

By the end of next year 30 percent of all internet traffic will be from mobile. “Our own date tells a similar story,” Patel said. By the fourth quarter, Google expects mobile query volume to surpass desktop volume.

The explosion of mobile search, and the devices enabling it, has forced Google to adapt its platform to account for changes in the way consumers search, from different devices, in different locations and with different need states.

He demonstrated how this works using pizza as an example. “A few years ago, there would be the same results for everyone searching for pizzas in this room,” he said, “Now SERPs are more personalized, so the ads should be too.”

That’s where Enhanced Campaigns come in. Patel showed two examples of how the ads served for the same query adapt to a user’s circumstance. One example was a woman with a smart phone on the go, downtown in the evening. The other was a man, at a desktop, at lunchtime.

The ads served to these two users for the same query differed based on the context of each users. The mobile ad was optimized for a smartphone screen, and pushed a $3 slice offer at a nearby pizza place. The man was pushed a lunchtime pizza offer with the option of ordering online.