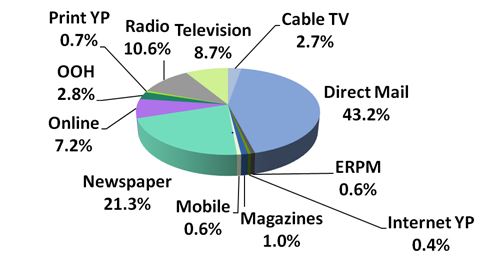 So what types of retailers are spending money on direct mail? The largest spending retail specialty is warehouse clubs and supercenters, with $2.35 billion in spending on direct mail in 2012. This is more than double its closest competitor, discount department stores, which spent $1.1 billion.

What attracts retailers to direct mail over other media? According to direct mail companies, unlike ads on radio, television and newspapers, which go out to everyone in the market, direct mail can be targeted to a particular location or demographic, providing a better ROI. This could be valuable to brick-and-mortar retailers with fixed locations. Not everyone subscribes to a newspaper, watches TV, listens to the radio, or owns a computer or smartphone, but everyone gets mail.

The National Federation of Independent Business (NFIB) says that direct mail is an old-school marketing method that still works for small businesses. “Direct mail can be an effective part of any marketing campaign. Yes, email, Facebook and even Twitter work for some small businesses, but that doesn’t mean tried and true methods like direct mail should go by the wayside.”

BIA/Kelsey expects this to change somewhat by 2017, with direct mail still on top with 25.1 percent of total advertising dollars, followed by television with 15.1 percent, with newspapers falling to third with 11.9 percent.

More information on Media Ad View Plus is available here.