The idea behind interactive television is combining the power of Internet ads with television content. Advertisers are consistently looking for ways to transform advertising from a passive consumer experience into “calls to action” that engage with brands and local businesses. Viewers can respond to ad offers instantly with the click of their remote. Brands also hope to drive viewers to second screens such as smartphones and tablets for even more engagement. Enhanced iTV is available in Time Warner Cable’s existing interactive TV markets nationwide, including New York City, Charlotte and Cincinnati.

“iTV provides traditional TV advertisers with the ability to measure the effectiveness of their TV campaign so it works for local, regional and national advertisers alike,” said Joan Hogan Gillman, president of Time Warner Cable Media in a statement to BIA Kelsey. Brownlee Jewelers, a local retail chain in Charlotte, increased its in-store traffic by 150 percent after implementing a media plan using iTV. Over the course of 12 weeks, Brownlee Jewelers ran 2,000+ commercials with the following message as the on-screen overlay: “Earn more money in 10 minutes than in one full work week!” 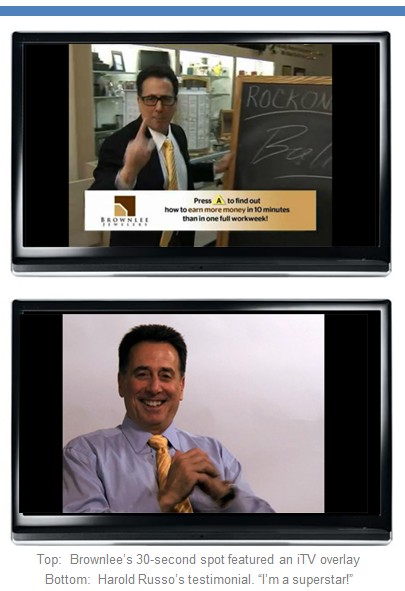 Not all iTV ventures have been successful. One notable failure is Canoe Ventures, the project of six cable giants (Comcast, Time Warner Cable, Cox Communications, Charter Communications, Cablevision and Bright House Networks) that lets advertisers include interactive elements in commercials. It announced last month that it was closing its iTV-ad business to focus on video-on-demand advertising.

As we see with Time Warner Cable, individual carriers are continuing to pursue iTV business through their own ad-sales teams and video-business units. Other players in this space include Cablevision, DirectTV and TiVo.