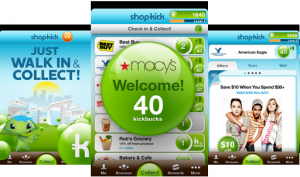 Shopkick, the location-based shopping app, announced today that it has more than 3 million active users since it launched over a year ago and that more than a billion of its in-app deals and offers have been viewed. Shopkick’s app communicates with a patent-pending device in stores, letting customers earn rewards just by strolling into a store with the app open and looking at products.

Shopkick’s new location technology, “shopkick Signal,” enables the app to verify location within feet. Since detection occurs on the user’s mobile device, privacy of presence information remains in the users’ control. As we noted in our cross media predictions, check-ins are becoming more automatic and algorithmic.

— More than 4000 individual stores across multiple retailers and 250 malls have deployed Shopkick’s technology
— Five million users walked in to Shopkick partner stores in December 2011, twice the amount of walk-ins from four months prior
— 64 percent of all Shopkick users are women, more than half have children
— Over 150 million interactions with retailers since it added Old Navy as a new partner in November.

Palo Alto, California-based Shopkick has raised a total of $20 million from Kleiner, Greylock, Hoffman (investing as an individual before he became a partner at Greylock), Citi Growth Ventures & Innovation Group, and Ron Conway’s SV Angel. The free Shopkick app is available on iPhone and Android.