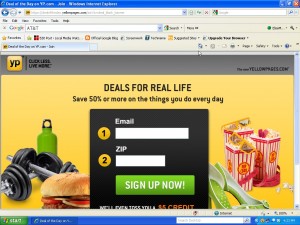 We predicted in our U.S. Local Media Annual Forecast the growth in the U.S. daily deals market from $1.25 billion this year to $3.93 billion in 2015. Low barriers to entry are producing a host of Groupon and LivingSocial spinoffs. Established local search giants are also looking to cash in. To that end, AT&T launched its Deal of the Day offers in Atlanta, Dallas and Los Angeles on YP.com this week. Previously, we reported on its anticipated arrival. YP.com already features coupons and promotions, enabling SMBs to leverage local search platforms to appeal to both new and existing customers. Other local search publishers like Sensis, PagesJaunes and DirectWest have hoped as much by entering the deals space as well.

AT&T may have a sweet spot among mobile users since it automatically installs a YP app on its Android phones. AT&T Interactive plans to integrate Deal of the Day offers into its YP mobile app on iPhone and Android in a few months. AT&T plans expansion into other U.S. cities later this year. And local deals are just the tip of the iceberg. The company anticipates offering national deals as well.

In our upcoming Yellow Pages deals Advisory, we profile which major Yellow Pages companies are involved in deals and their individual growth strategies for the deals space.