Just in time for next week’s Deals 3D conference, we’ve published a new report on mobile deals. The idea is that as deals collide with mobile, it will represent the Act II of the exploding space (although deals go back much further than the recent wave of group buying).

Local deals have existed for decades in the form of coupons, but they’ve been reinvented over the past few years by Groupon and its group buying model. That model is shifting as the momentum behind deals collides with the equally powerful momentum behind mobile.

The product of the two will be a broader set of deal models, which appeal to a broader set of users and advertisers. Things like immediacy, local relevance and consumer buying intent — inherent in mobile use cases — will improve distribution and deal performance.

So the shift to mobile will represent local deals’ “second act.” And during this period, many companies will attempt to solve some of these challenges seen in deals’ first act. We walk through lots of examples in the report of how this is playing out so far.

Mobile Local Media clients can log in and access the full report here. Anyone else can email me to get bits and pieces or learn about getting the entire thing (mbolandATbiakelsey.com). We also hope to see you at our Deals 3D conference next week in San Francisco.

We’ll have a session on this very topic starring Foursquare, Yelp, Shopkick, Loopt and others. Whoever emails me at the above address within the next 24 hours can get a discount code for $100 off registration. If you use it, I’ll throw in the report (in the spirit of “deals”). 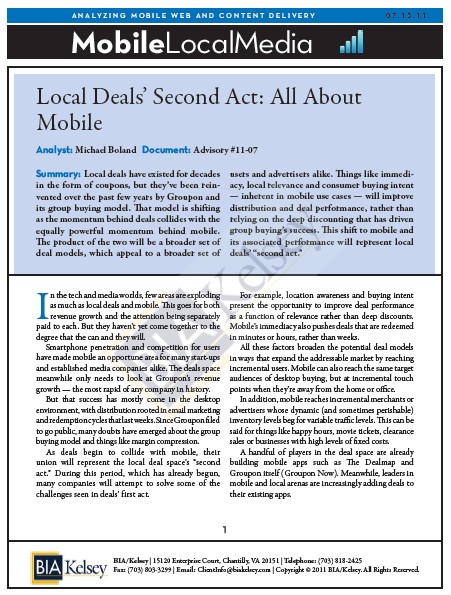