Facebook announced today that it has turned the corner on 250 million active mobile users.

This is a big leap from the 100 million it announced about a year ago. At that time, it had 400 million total users. So when it announced it was approaching 600 million users recently, we in the analyst corps applied a similar multiple to extrapolate ~150 million mobile users.

Today’s announcement not only pegs that number at 100 million higher but it means that Facebook’s mobile share of overall users has grown from 25 percent to 42 percent. This makes sense given that most growth across digital media is coming from mobile versus online.

This is compounded by Facebook’s growth in emerging markets like Indonesia, where many users leapfrog fixed telephony for mobile. Facebook’s optimization for different devices and browsers further accelerates adoption – especially its “Zero” mobile Web page that sidesteps data transfer.

Along these lines, Facebook also announced today that it is integrating its smartphone (touch) and feature phone optimized sites so that its engineers can accomplish feature parity between the two. They’ll of course render differently across devices but the back end is better tied together.

More notable is the escalating mobile active user count (and share of total). It’s also supportive of the rise of social media on the mobile device — two elements of the “SoLoMo” concept that was a key theme at last week’s ILM East conference. We haven’t heard the last of it. 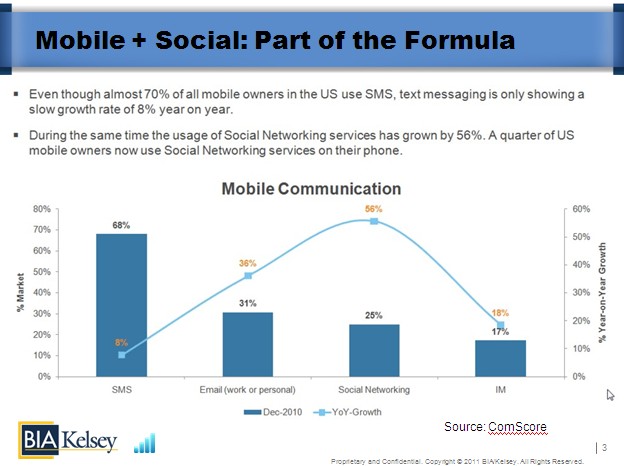