This morning I received a note from Adaffix CEO Claudia Poepperl about a deal the company formed with Orange Austria to integrate directly into the carrier’s network infrastructure. As anyone in the mobile game knows, carrier deals (especially pre-iPhone) are like gold.

The offspring of this union is called NameThatNumber and will beef up the carrier’s missed call notification texts by adding the caller’s name.  For users this is a nice touch, but it also has relevance for carriers in that links to mobile sites with more information about the caller.

“The service is also highly relevant for the directory industry as we drive traffic to their mobile sites when the user clicks on the link in the missed call notification SMS,” Poepperl mentioned in an e-mail. “It works for residentials as well as for businesses. In Austria we drive traffic to HEROLD’s (European Directories) mobile site if the caller was a business.”

A bit more detail was offered in the press release regarding monetary terms and carrier revenue structure:

Now network operators can monetise on missed call notification traffic by offering NameThatNumber as a subscription included in their tariff structure. A carrier with 5 million subscribers can generate a top line revenue of 125 million Euro within 5 years.

Like many of the enhanced call features that Adaffix has built, this is a logical tie-in to the activities that mobile users conduct most (calls & clicks). In that sense, it is creating new ad units that tie-in with these activities and didn’t exist before. Phonetell does similar (but in a different way).

This is also boosted by the proliferation of Android devices, where it’s more open and easy to tap into native capabilities like the dialer (as opposed to iOS). Then again, as mentioned, hitching on to a carrier also creates prime position in both technical and market penetration aspects.

It’s a good move all around and it also positions Adaffix to prove itself to other worldwide carriers. In that sense, we should see other carriers gain interest in these types of features to enhance their own competitive position in respective markets. 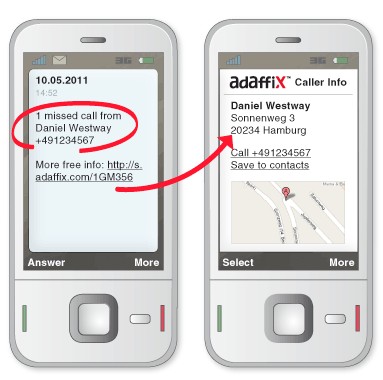