The rollout of Facebook Places was supposed to spell certain doom for check-in companies such as Foursquare and GoWalla, and the whole check-in and location-based services infrastructure, right? But it hasn’t exactly happened that way, says DoubleDutch CEO Lawrence Coburn, who spoke yesterday at Bolo 2010 in Scottsdale.

For sure, Facebook Places is powerful, and is likely to play a key role in powering services such as Zynga via its omniscient API, says Coburn, whose company provides check-in capabilities on an enterprise basis (See Mike Boland’s June interview with the company.) But after the first inning, Coburn notes that Foursquare is still likely far ahead with 4 million users.

It isn’t an apples-to-apples contest, either. In fact, the check-in ecosystem is a complex one, broken down into one-person content companies and group content, notes Coburn. Companies might specialize in LAT Long Detection, LAT Long Translation, The Social Graph, Content, Game Mechanics and/or Monetization. The latter needs more work, says Coburn.

A big payoff, however, is likely, especially as a second wave of interest in geo-applications gets under way from brands, city guides, events and universities. Basically, it is all about “asset tracking for people,” Coburn says. 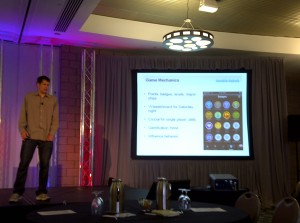