Where (formerly uLocate) continues to redefine itself as a mobile local content and ad targeting play. Its latest move offers coupons and nearby specials to users who check in to places through its mobile app.

According to today’s release:

When using Where to help discover local places, consumers will now receive coupons from local merchants when they check-in to a location. Where offers one of the most comprehensive collections of mobile coupon and offer inventory available from restaurants, retail stores, spas, and other service providers. With hundreds of thousands of deals presented daily, Where is a leader in helping mobile users find great deals nearby.

This clearly plays to a growing trend and interest in mobile coupons and on local deals. The latter is on fire right now. This also further motivates users to check in, another big trend in mobile. The increasingly popular Where app already had check-in functionality, but this puts a new spin on it.

There is growing market sentiment that more has to be offered by mobile check-in services. The game mechanics and virtual goods (i.e., Foursquare badges) only get you so far and the novelty can wear off. So not only do we see check-in functionality make its way to nearly every mobile local app lately, but feature sets are also quickly evolving.

Foursquare, for example, just improved its places tab to more intelligently suggest nearby places to check in or visit. It previously listed the closest venues, but now takes into account additional factors such as time of day. And its nearby offers continue to grow.

We’ll see lots more innovation here, especially as Facebook’s looming entrance to the space ignites competitive differentiation. Though there is lots of talk of Facebook as the category killer, I still feel there is room for differentiated smaller players like Foursquare, Where, MyTown, etc.

If anything, Facebook will “mainstream” the segment. In addition to its own speculated mobile check-in features, look for it to also federate check-ins from various apps and allow them to plug into the open social graph. This could help smaller players more than it hurts them. Lots of development in store for the coming weeks. 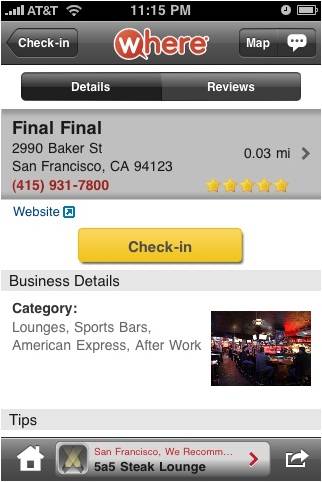