Today brings two meaningful announcements in the answers space from SuperMedia and MerchantCircle. Answers is an area that seems to be getting more attention as a way for local merchants to differentiate themselves online and for local online media sites to generate social content that indexes well.

AskLearnHire is designed to match consumers at the research phase (i.e., higher in the purchase funnel). The site is initially focused on three categories — Mortgages, Remodeling and HVAC (heating, ventilation and air conditioning). Consumers looking for general answers about refinancing, remodeling, installing a new water heater and so on.

The new site funnels these questions to merchants, who answer the questions, and gain access to the leads that evolve from their participation in the answers process. This reflects two things about the post-bankruptcy SuperMedia (ex-Idearc). First, its emphasis on verticals. And second, its emphasis on developing multiple products quickly, pushing them into the marketplace and seeing what works. The skunkworks approach, and the willingness to occasionally fail that it reflects, are refreshing changes for a big Yellow Pages company.

MerchantCircle has been in the answers game for a while, accumulating 100,000 responses to questions on its Answers page. The company today announced deals with Demand Media and HelloMetro, aimed at strengthening its position in answers, which VP of Marketing Darren Waddell notes is a source of content with strong SEO value. 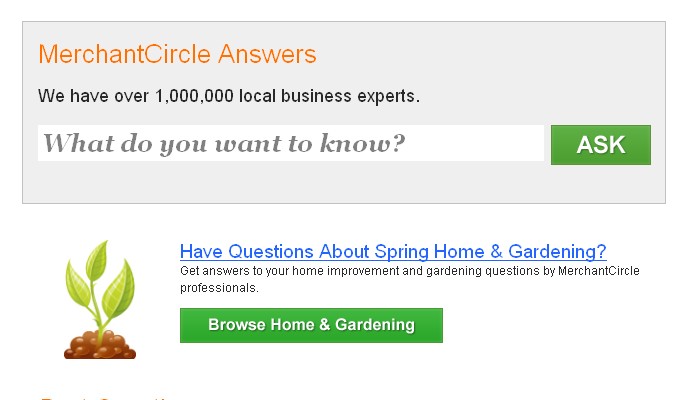 MerchantCircle will work with Demand Media’s Answerbag.com to route answers posted on that site through the MerchantCircle network. The top responses from MerchantCircle small-business members will be posted on Answerbag. This gives MerchantCircle members a change to create content that indexes well, and helps them differentiate themselves, while it gives Answerbag access to more experts to handle consumer questions.

The deal with HelloMetroinvolves MerchantCircle Answers powering an answers service on more than 1,000 of HelloMetro’s 1,500 hyperlocal sites in the United States. HelloMetro is all about providing hyperlocal editorial content, as well as access to directories and classfieds. MerchantCircle will also faciliate connections between merchants and consumers on HelloMetro via its social networking platform.