The Apple iPad was finally delivered or sold to 300,000 people this weekend. Hardly any of us had even touched it before. After a couple of days playing with my new 32 GB, Wi-Fi only model — about $700 with tax and a basic dock — here are some topline observations:

All in all, it really doesn’t seem like such a big deal when you get it. It just goes to work and is Apple-intuitive. Naturally, I downloaded a bunch of apps that were local and/or news centric (Yellowbook, Yellowpages.com, YPMobile, SuperPages, DexOne Mobile, Zillow, Trulia, Cars.com, eBay, Fwix, WeatherBug, Yelp, Citysearch, New York Times Editor, Wall Street Journal).

The Zillow app is an outstanding prototype for what this thing can be. It allows full blowups of residences, and takes excellent advantage of the GPS mapping. It is a major improvement over the regular version.

You need to be careful downloading apps now that there are so many paid ones. Many are basically impersonations of what most people are looking for. Looking up “Yellow Pages.” for instance, there are several that aren’t the bonafides (and sometimes the bad reviews are the only clues). And what might have made sense for differentiation on the iPhone (“YPMobile”) makes little sense on the iPad. Careful with the branding …

Ultimately, as our new “kitchen PC,” I already know thisis my family’s new Yellow Pages. The branding and marketing here is going to be vital. And time is of essence.

But is it going to take the place of our print newspapers at last? The New York Times “best of” selection is beautifully organized and so clear to read — a clear demonstration of superiority over the Web-based version (which can always be accessed). It may really be “better.”

I think it will win out in the end. But there are compromises. My wife and I can’t trade sections over the kitchen table, and I don’t want to get milk on this thing either. The LA Times, our semi-local paper, will still get soaked with milk.

At 3:40 yesterday, the iPad got a very immediate trial by fire as a news machine when the earthquake struck.

There were all the instant comments on Facebook (yes, earthquake in LA in Orange County, no earthquake in Temecula). Within an hour, the seismic charts showing the earthquake in Mexicali made it on to the Web — my tech-phobic mother-in-law quickly grasped the touch screen, spreading her fingers and widened the picture, showing that Mexicali is about 108 miles south of the border. Not bad! 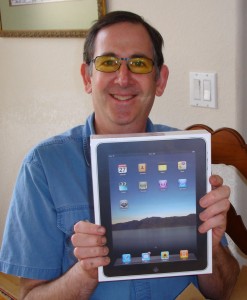