One of the most talked about presentations at last week’s Marketplaces 2010 conference was MojoPages CEO Jon Carder and his breakdown of game mechanics.

Characterized by Carder as “the new black,” game mechanics are behind the growth of lots of social products like Foursquare. They often involve competitions for certain designations (i.e., mayorships) or the exchange of virtual goods (accomplishment badges).

These create a certain amount of stickiness around products with a value exchange for the user, or simply an injection of fun to otherwise static products like local search. Most of the activity around game mechanics are bubbling up in the mobile world and are tied in some ways to location.

He then gave a few case studies of products that have “pulled it off,” including Foursquare, Groupon (see below) and of course MojoPages. TechCrunch this week adds to the list of a few products on the “wish list” for game mechanics including Amazon and FedEx.

Panning back to a 40,000-foot view, this is once again driven by many of the usage trends and hardware standards quickly evolving in the mobile world. But it’s also migrating online in lots of ways and could be tied to broader social phenomena.

Injection of levity and fun, for example, could be reflective of a mental escape from recession and the industries in crisis that have defined the past 24 months. The question is, will game mechanics be central to the tech and media products that define the next 24? We’re moving in that direction. 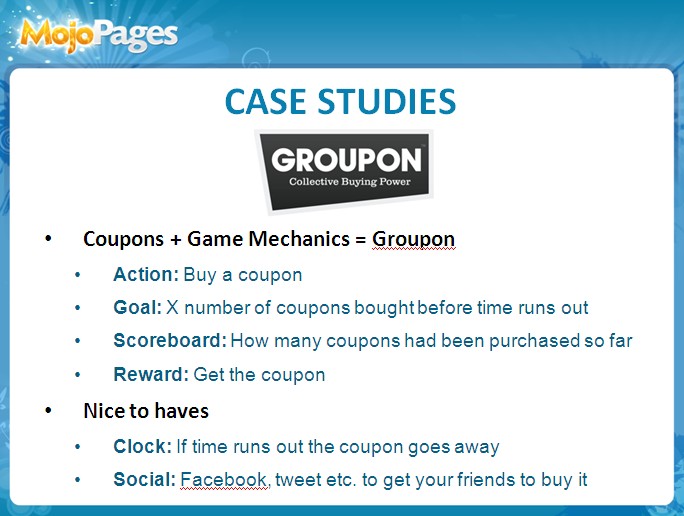