Morgan Stanley Managing Director Mary Meeker gave her annual brain dump to the Web 2.0 Summit yesterday, painting a picture of a mobile-centric media world on the horizon. At the heart of her argument was the contention that location (mobile device’s inherent portability and location awareness) will drive much of this innovation and value.

There were also some interesting data slides supportive of the growth of the mobile Web. Overall it has grown at a much faster pace than the desktop Web and will eventually be 10x greater in  user volume, she contends. Already, iPhone users are 8x the volume of AOL users in each of their respective first 8 quarters of use (see chart).

Much of this will be driven by the new class of smartphones that are quickly growing in use. To support this, one slide (see below) shows the disparity between the Web traffic happening on the iPhone and Android platforms, versus their actual device penetration. It’s interesting how there’s a consistently inverse relationship between traffic penetration and device penetration.

But the takeaway here could be that the newer entrants such as iPhone and Android have higher traffic share simply because of their better Web browsing capabilities. The sales growth that results from this appeal could cause the disparity between device share and traffic share to level off. In doing so, the implication is that device share will eventually eclipses that of the current leaders such as Symbian and RIM.

And speaking of device sales growth, her data also illustrate just how much of a commercial success the iPhone has been to date. Specifically, the global cumulative sales growth (iPhone + iPod Touch) in its first 10 quarters has outpaced any other hardware platform including Nintendo Wii, Sony PSP and other leaders. 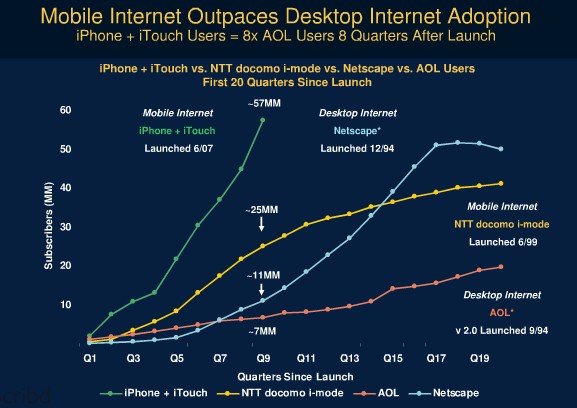 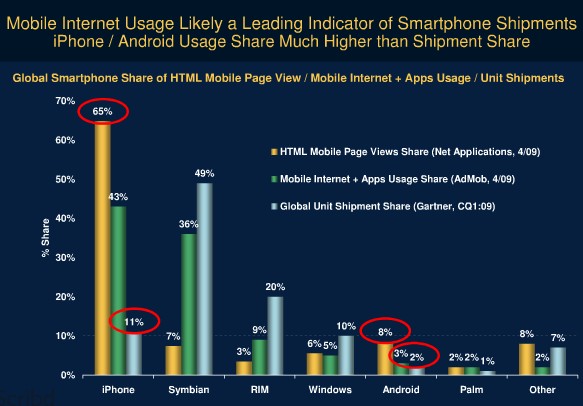