I recently had the chance to catch up with G5 Search Marketing CEO Dan Hobin about the company’s recent appearance on Inc. Magazine’s “Fastest Growing Private Companies in America” list.

At No. 146, the company had 2008 revenues of $3.4 million, a 1,208.5 percent increase since 2005. These aren’t huge numbers, and the steep percentage growth is a result of growing from a small base. But it’s not bad if you consider the company didn’t receive venture funding. It’s also on pace to see $7 million in revenues this year, according to Hobin.

Hobin attributes the company’s growth to a combination of expansion to additional verticals, and macroeconomic factors. As we wrote in our last profile of G5, the company has an established position within the self-storage vertical. But it has more recently been branching out into verticals that have similar needs for its brand of search marketing, including assisted living.

In terms of the economy, Hobin agrees that recession has caused advertisers to demand more measurability out of every ad dollar spent. One of the strengths of G5’s platform, in fact, is its analytics dashboard that not only uncovers where leads are coming from but also how well companies are converting them (via recorded phone calls).

“I honestly think this recession is helping us and companies like us,” says Hobin. “People want accountability, and they are looking at every dollar closely in order to track, measure and determine where to get the best return. Right now the best returns are in search.”

For similar reasons, a few other SMB-focused search marketing firms showed up on the Inc. list, including the fast moving ReachLocal. 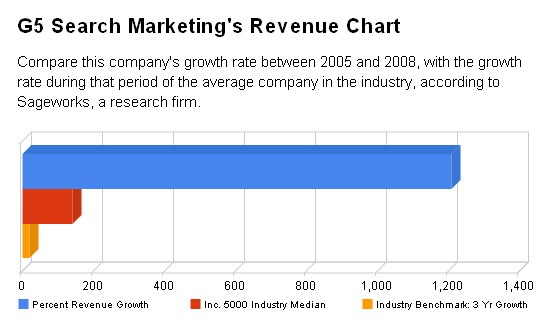