Today I had the opportunity to catch up with SinglePoint Marketing Director Philippe Poutonnet. SinglePoint powers all the text-in response campaigns for Bravo (“Top Chef,” “Project Runway,” etc.), MTV, Viacom and other top networks. This usually involves “American Idol”-style voting for a variety of programming.

Users who text in are typically given a response that SinglePoint has begun to utilize for targeted opt-in ad delivery. The response could include a link to a mobile site, a mobile video, click to call or a coupon. Because this is done on an opt-in basis to a self-selected audience, response rates tend to be high when compared with average online CTRs.

This also allows for attractive ad targeting, said Poutonnet. It’s essentially the same audience segmenting afforded by television programming (a subset of the same audience) for a fraction of the cost. SinglePoint’s advertisers include top brands interested in this type of targeting, such as BMW, Dell and P&G.

There is still an imbalance between the sell side and the buy side, however, said Poutonnet. Though mobile engagement rates are rising rapidly, advertiser interest is still in an early adopter phase. Many still see it as “experimental,” a scenario made worse by the current economic environment.

Poutonnet sees an upswing however, and believes we are crossing the mark when it is becoming more of a mainstream ad medium. SinglePoint has, in fact, started about 100 new campaigns since the beginning of the year. Ad fill rates are currently only at about 30 percent of eligible SMS inventory, but this is rising, he said.

One of these targeting metrics, location, will become more and more important as advertisers realize the location targeting capabilities of the mobile device. Many advertisers are just entering the mobile space and will need some time to figure this out.

An increasing amount of SinglePoint’s inventory is location targeted, according to Poutonnet. For that it’s working with HipCricket, a good source of locally targeted SMS ad inventory that we’ve written about in the past. HipCricket CEO Ivan Braiker was also a speaker at our recent WMS conference.

For now, SinglePoint is in a good position with the SMS search inventory it has, and the rising interest in mobile marketing on the part of many brand advertisers. As discussed at WMS, the opportunity for many brands is to use SMS calls to action to extend the brand beyond the impressions they’re getting from traditional marketing.

Media companies at the local and national levels meanwhile benefit from this same concept. Their opportunity is to provide mobile as a component to the media they are selling. It can be either a retention tool or a means to incremental ad revenues. Either way, it adds a measurable component to what was otherwise an impression-based media.

Demand will continue to shift toward more measurable, trackable and performance-based media — good times or bad. This will be discussed in a BIA/Kelsey webinar next week. The challenge for media organizations, agreed Poutonnet, is training media ad sales reps to know how to sell it.

“We spend a lot of time training sales forces how to sell our product,” he said. “Some advertisers know it and are asking for it. But many need to be educated.” 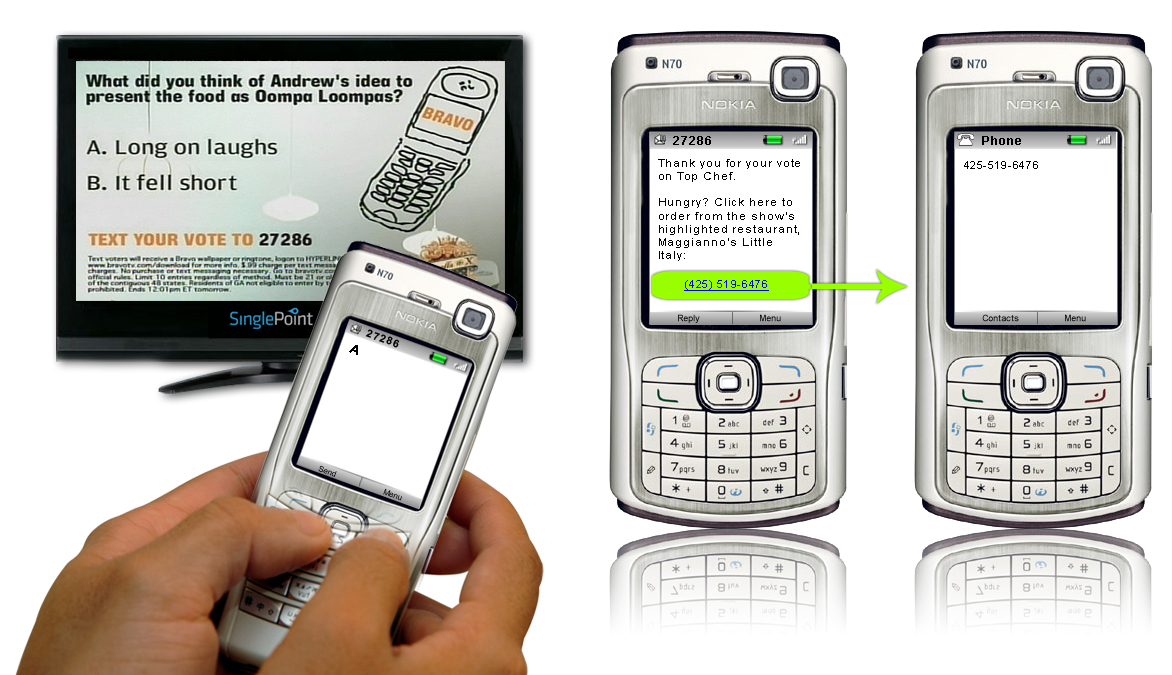 Related: Here is more on how SinglePoint is working with NBC Universal.