We’ve heard a few (admittedly anecdotal) claims of SMB video’s effectiveness in raising clickthrough rates and engagement levels from those that have begun to offer it. The numbers we’ve heard from the likes of eLocalListing, Weblocal.ca and Brownbook are that listings with video are seeing anywhere between 2x and 12x CTRs over listings that don’t have video.

Mixpo is one of the online video providers out there that is offering an easy-to-use tool to create video. One of its selling points is closely tied to these engagement metrics — it builds itself on a series of calls to action embedded in videos and a strong analytics dashboard (more on Mixpo in past posts).

Recently the company put out another round of case studies that showcase some of these data coming out of the local video campaigns of its advertisers. These include everything from regional McDonald’s franchises to academia, and ran as 300×250 display ads on its distribution partners’ sites.

One example is the Sonoma County Tourism Bureau. Its goal was to promote the region by spotlighting local chefs, winemakers and entertainers. It collected a bunch of existing footage and put it together with Mixpo’s VideoAds platform (WYSIWYG production tool).

Different Ads were used in different places and at different times, such as weekly, monthly or seasonal promotions. This was done by subbing in different messaging and calls to action, which is easier with a tool like VideoAds than it has traditionally been with local video advertising such as cable.

Here are the results according to Mixpo:

The VideoAd achieved an overall engagement rate (ER) of 1.65 percent.
This impressive ER is 16X better than the clickthrough rate (CTR) of typical
display ads.

Viewers were highly engaged. They watched, on average, more than 67
percent of the VideoAd. Forty-three percent of viewers watched the
VideoAd all the way to completion.

During the promotional period, viewers watched a total of 1200 minutes of
the VideoAd.

This VideoAd campaign delivered a $1/engagement ROI. For this client and
publisher, the ROI for a display ad is $4/click.

Generally, isolating video as a variable is tough and there are a number of other factors that could account for higher than average CTRs (are naturally strong businesses more inclined to, or more capable of, paying for a video?).

But I won’t get into a whole discussion of causal relationships versus natural correlations. It appears video is having an effect on online listings’ performance, for many of the reasons we’ve discussed in the past. Mixpo has also been effective in isolating video as a variable by comparing it to advertiser goals and past benchmarks.

In that way, the company can not only help advertisers boost engagement metrics but also help its publisher partners better monetize their display ad inventory. Remember these aren’t in-stream (pre-roll) ads but rather 300×250 display ad units that contain video.

Benefits in the future could also come with working with cable TV stations to offer their advertisers bundled TV and online distribution. The online ads can supplement TV ads, using the same creative edited into short videos and distributed to a separate online audience.

We’ll expand these and other video case study findings in an upcoming report. 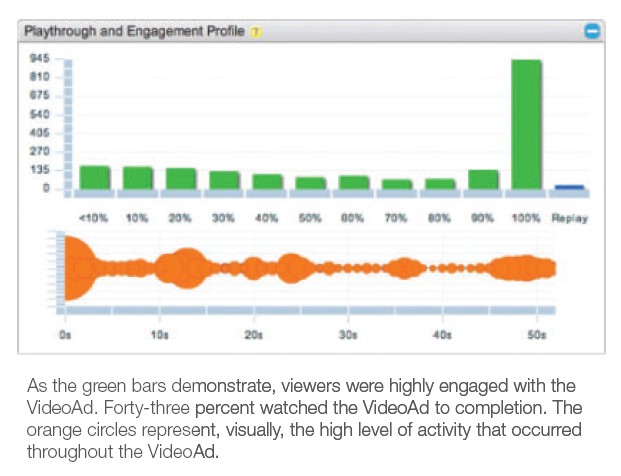