These kinds of companies are providing state-of-the-art features that many full-priced websites didn’t provide even four years ago, including (in some cases) landing pages, SEO, photos, video, blogs and reputation management. But from a business perspective, the SMB website players remain a work in progress.

SMB customer support issues are big ones. Many SMBs infrequently update their information or engage with their customers. And while the sites can make healthy revenue from search-related advertising, conversion rates to premium tiers that include Search Engine Marketing packages have been on the low end – generally, five percent or less.

MerchantCircle, for instance, reports that 15,000 of its signups now pay for a premium tier. It is an increasingly sizeable number, supplemented by “tens of thousands” of leads to SMBs from its partner sites. But 15,000 remains a low percentage of its overall signups — two percent.

The sites also haven’t made a huge dent getting SMBs onto the Web in the first place. According to the latest wave of Kelsey’s Local Commerce Monitor, 61 percent of SMBs that advertise now have websites. That’s significant progress, but the game clearly isn’t over — especially among SMBs that haven’t advertised in the past.

Industry trends present new challenges. This is especially the case with the rise of social networks like Facebook, which can isolate profiles if they aren’t “ported” by the SMB from their site.

SMBLive CEO Matt Howard has been working with over 350,000 SMBs in the UK as a vendor for BT Tradespace. He says these are universal challenges for the industry.  His answer? A “Cloud Profile” that allows small business owners to author content once and syndicate out to a wide range of different sites, including Twitter and Facebook, where consumers increasingly share and discover things.

The Cloud Profile was released a few weeks ago in a private beta. SMBLive expects to distribute it via third parties, such as directory publishers and broadcaster sites.  Howard hopes it will move the needle several inches in terms of boosting penetration, updates and interaction, while minimizing customer support issues. 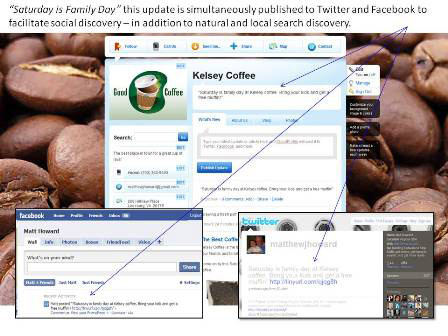