I’ve spent the past few months in talks with Skype about how the company would like to diversify its product model, and better position itself as a tool to generate leads for local businesses.

Perhaps the timing couldn’t be better for a redefinition like this. Months of speculation over eBay’s divestiture of Skype culminated with this week’s announcement that it will spin off the company in an IPO next year. As an independent company, perhaps it will be better equipped to realize this vision.

In the meantime, the wheels are turning. The idea was born with Nick Corr, Skype’s senior product manager of e-commerce, and first got going in talks with an undisclosed (NDA protected) visionary at a European Yellow Pages company. Corr, a former Yellow Pages guy himself, knows how to speak the language.

The idea is that Skype is used by 405 million global subscribers to make free and cheap calls. Why not position it as a complementary tool to help find and drive calls to local businesses too? This was the same idea behind the launch of SkypeFind (which we covered here), but takes it a step further.

Essentially it broadens this to the larger Web, where most local search activity is already happening. What the idea requires is that phone numbers that show up throughout local search results be hyperlinked to launch a Skype call.

Skype is already halfway there, given that Skype 4.0 users have an automatic browser plug-in that lights up any phone number in the browser window for a Skype call (see screen shot below). The downside is that the use of these links is limited to SkypeOut subscribers — those who pay to call out to landline or mobile phones.

So what Corr is proposing — a departure from Skype’s strictly subscription revenue model — is that calls to local businesses be made free. They’re instead ad supported, with Yellow Pages publishers being the source of advertisers in need of calls.

The way this is playing out in initial stages is that YP partners purchase discounted wholesale calls from Skype. They then essentially own these Skype links to drive calls to their advertisers. They also can derive performance metrics about how many calls they delivered.

Of course this concept is nothing new for YPs, having done a lot of call tracking already in print and online. But the difference here is that these Skype links aren’t unique tracking numbers that just reside on publishers’ own sites. They’re businesses’ own numbers that appear all over the Web.

“Through Skype’s contact mechanism, it basically turns all of these numbers into metered calls,” says Corr. “We can measure right down to how long the call lasted, time of day and stuff like that.”

The beauty is that these numbers are appearing in Google searches and in the famed local “10 pack” that’s gotten so much attention lately for expanding its frequency of appearances. This all comes down to the simple fact that the 10 pack’s design includes phone numbers with each listing. 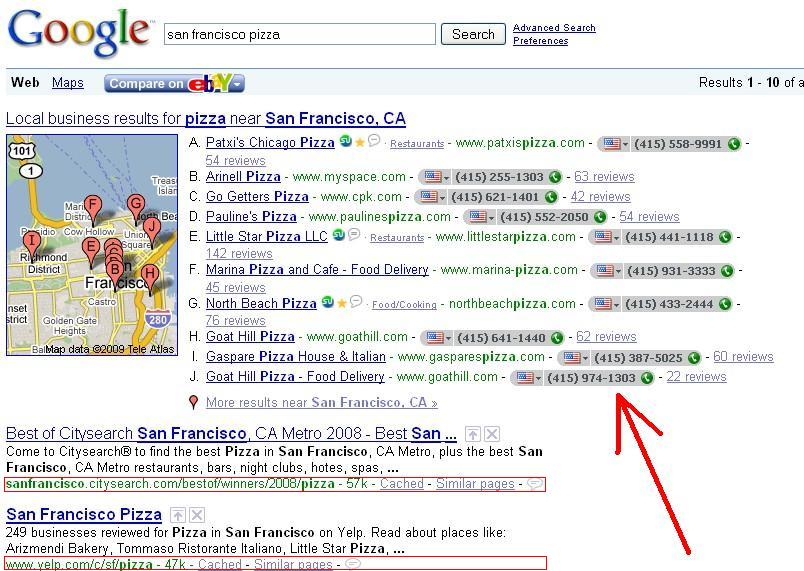 So essentially, these are all numbers that are eligible for Yellow Pages companies, in partnership with Skype, to take over and drive calls to their advertisers. This is big if you consider the degree to which the 10 pack has displaced local search companies that vie for Google organic traffic (see Citysearch and Yelp in the above screen shot).

The other partner is Yellow Pages Group New Zealand, which is very bullish on the new capability and seeing strong results in trials so far.

So how will YPs monetize this, and how will Skype make any money from it? It will depend a great deal on what trial results continue to show about high-value categories and advertisers, according to Chintaka Ranatunga, corporate business development manager at YPG-NZ.

“It can fit in as a retention or ROI improvement for their existing package,” adds Corr, “And then as they learn more around who’s getting value and where the leads are worth more, they can start to price it differently based on what making the phone ring is worth to [each] advertiser.”

Though he can’t yet discuss specifics, Corr tells me that trials are showing a significant increase in calls made to businesses through their system. Interestingly, there’s also an increase in domestic calling. This could show the potential for local search to join Skype’s well-known branding as an international calling tool.

But more importantly, it could be a revenue diversification move, leveraging its massive user base to tap into the $32 billion global Yellow Pages pie. According to Corr, most of the YP deals will be set up as revenue shares and he’s confident that current trials will serve as a proof of concept for more publisher deals.

Depending on user uptake and conditioning to see Skype as a local search tool (presumably less of a challenge overseas), this could represent a big opportunity for the company — and at just the right time.