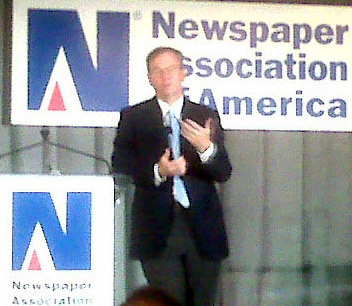 Google CEO Eric Schmidt addressed newspaper publishers this morning at the NAA Annual Convention in San Diego, giving a high-level, thought-provoking talk (without apparent notes) about the future of information and the role that newspapers, search and consumers will play in it. (While I attended the event, the talk was streamed online here.)

Schmidt noted that there are basically two models of information: the newspaper of record and Wikipedia/user-generated content. Given the rapid shifts in technology and consumer patterns, there’s going to be some integration between the two, and we are going to have to relearn what a “newspaper of record” means. Reporting “is what newspapers are ultimately about,” he says. “Knowing all things that happen in a local environment, a national environment and a global environment.”

Schmidt suggests that it will be marriage of reporting and reliable networks of communication, such as cloud computing. One example of such a marriage was Google’s mapping this year of Flu Trends. “It provided early, instantaneous analysts that gets ahead of everyone else” and had real societal importance, says Schmidt. Looking forward, Schmidt anticipates databases providing instant “BS detectors” for politicians in debates and other forums. “It’s the most obvious,” he says.

Mobile also plays an essential role in Schmidt’s vision of user empowerment. “It isn’t obvious, but it represents a fundamental change — all in a local context. If you like history, you can walk down the street in San Diego, and the phone can tell you the history of every building,” he says. “We never had these kinds of tools before to use, and perhaps, misuse.”

The ultimate goal is “to get 1 billion people with this kind of power in their hands. It is easy. That many mobile phones are being built in the next couple of years with this kind of capability. The underlying platform has now been built, and all the mobile operators are now building services with the kinds of capabilities I am describing.”

While the Web and mobile is our future, right now, Schmidt concedes the UI needs a lot of work. “The Web is still relatively unpleasant to read,” he says. “Think of the joy of reading a magazine. It is the most wonderful experience. Why can’t we recreate the same thing on the Web? The online experience is terrible compared to the wonderful experience of magazines and newspapers. It is a fundamental thing we don’t do very well on my side of the world.”

But personalization will be a factor in making the Web better to use, he says. “People consume information in many, many ways. Now we have the opportunity” to get away from one size fits all. And “we need new formats for journalism that will work for all platforms.”

The newspapers’ lack of knowledge about their readers especially has to evolve, says Schmidt. “Why doesn’t the newspaper know what I read yesterday? It is easy to remember this kind of thing. The new model is knowing you have already read this … you can tell me what has changed.”

User-generated content also plays a major role in all this. “The reality is the vast majority of information is not being produced by any traditional means. It is being produced user-to-user. That’s another fundamental change. People care a lot about what their friends are doing.”

But what is the business model, going forward? Schmidt notes that “the Internet doesn’t respect traditional scarcity structures. We think the answer is advertising,” he says. “Of course we have a bias. Ninety-eight percent of our revenue comes from advertising.”

While Google’s cash cow is text ads, Schmidt says the company has to keep pushing the envelope of better story telling — “ads with narrative and engagement.” User engagement is key to all this. “When you go the movie theater, people will be twittering: ‘Oh, I think he is wrong,’ or ‘this is going to happen next.’ We’ll have mood mapping in real time,” he says. (Google is rumored to be in talks to buy Twitter.)

But Schmidt also sees subscription-based models making a comeback, perhaps using Kindle as a core platform. “Kindle is very successful,” he says. “It is another example of cloud computing for specialists. It is a model that works, economically and technologically.”

Schmidt noted that the model for subscriptions going forward is probably television, which is segmented into free TV, cable TV and on-demand paid TV. “The vast majority [of this] deals with the free model. But micropayments are getting to be possible.” Before, transaction costs were so high that you couldn’t do things that cost one or two cents. But now, “with aggregation, you can do this.”

So — given the venue, does Google believe there is a future for newspapers? Schmidt gives newspapers kudos for being early to embrace the Web. “They understood repurposing of the Web. They had their reporters blog. But there wasn’t an act after that. The act after that is much harder. How do you keep a user’s engagement? How do you keep from being disintermediated?”